Fender Blender Review – As Old School As It Gets 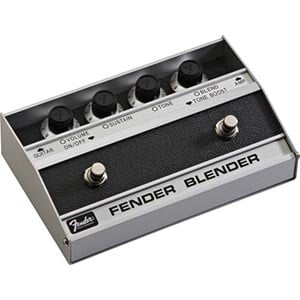 Most guitar players probably don’t even know that Fender produces effects pedals. One of their more outlandish creations is the Fender Blender. They weren’t content with creating a great fuzz pedal, but they instead had to go one step further and create what is to be one of the crazier effect combos during the time frame it was first launched.

Over the years Fender Blender became pretty famous thanks to this dual nature, and the fact that the fuzz effect it offered just couldn’t be replaced that easily. 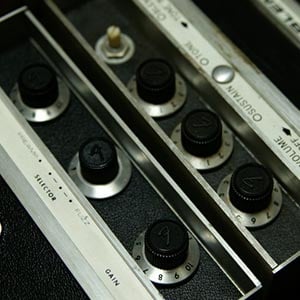 Out of all the popular fuzz pedals, this one is probably among the most unusual looking models you will see. It looks more like a vintage amp foot switch than a guitar effects pedal. The item’s all aluminum case is probably not something you want to torture too much, but it can carry its weight on stage.

This is a germanium based fuzz box that comes with an old school true bypass circuitry. There are four knobs for tone shaping, but it stands out from the rest of the pedals due to its second foot switch. This feature is the main reason why this pedal is still in relatively high demand. In terms of knobs available, things are pretty straight forward. There’s a Volume knob, which is self-explanatory. Next is your Sustain control knob that does exactly what it says. When you start going clockwise on this knob, you will hear a lot more sustain as the pedal is boosting the fading guitar signal. Next is the tone control that switched from lows to trebles, and Blend knob which combines the raw and processed signal.

That Tone Boost switch changes the whole nature of the Fender Blender. It adds an octave type effect on top of the fuzz, which makes the Fender Blender a bit uncontrollable at first. However, with some patience and practice, you can master dialing in just about any tone you want.

The type of sound you can expect to hear from Fender Blender is both pretty vintage, but completely wild at the same time. There’s enough gain to go as aggressive as you want, and that Tone Boost really adds an additional layer of craziness to the equation. Even so, it’s one of the best sounding old school style fuzz pedals on the market.

Overall, it’s fair to say that Fender Blender is definitely not your regular fuzz stompbox. It has a nature of its own that can either be your best friend or your worst enemy. Fender Blender is still hot due to its dynamic tone and richness that can hardly be replicated these days.

That goes for modern germanium pedals as well. Fender Blender is not that easy to handle for someone who doesn’t have experience with fuzz boxes, but seasoned players will definitely enjoy this model to the fullest. This pedal is the proof that old school fuzz will probably never go out of style. If you are looking for something proven but somewhat different, this is your pedal.