Fender ’65 Deluxe Reverb Review – So Nice, They Did It Twice! 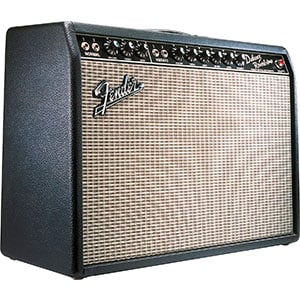 For some guitarists, vintage Fender Blackface amps (referring to various models produced between 1963 and 1968 featuring a black control panel) are the ‘holy grail’ of tone. The problem is that they can be relatively rare and very expensive – certainly not coming in at under $2,000 anyway.

With the Fender ’65 Deluxe Reverb Reissue – commonly referred to as the ‘DRRI’ for short – that classic Fender sound is on offer for substantially less money. Let’s see if it stands up to the legend of the original… The DRRI is an all-tube combo amp, with a varied lineup of tubes comprising two 6V6 Groove Tubes power tubes and one 5AR4 rectifier tube, as well as six preamp tubes (four 12AX7s and a pair of 12AT7s).

There are two channel configurations – Normal and Vibrato (to get your surf groove on), with each channel enjoying two inputs. The second input features negative dB padding to handle guitars with hotter pickups. Topping things off you’ll find a true spring reverb unit (not a digital reproduction), an included footswitch that controls both channel selection and reverb on/off, and a swish black Fender amp cover.

If you’re looking for any modern tech, such as USB connectivity or a selection of onboard effects, you’re barking up the wrong tree. The DRRI is intended to mimic the exact feature set found on a vintage ’65 Deluxe Reverb – last we knew, USB wasn’t around in the ’60s! Getting what you want out of the DRRI is a fairly easy affair. Each channel has the same three knobs for overall control (volume, bass, and treble). The Vibrato channel also has two additional controls for both the speed and intensity of the effect. Spring reverb levels are adjusted with a single knob. At this stage, it’s important to note that reverb is available on the Vibrato channel only. Ultimately, it may not be swimming with controls, but what’s on offer is simple, intuitive, and effective.

The clean sounds from a good all-tube Fender amp are legendary, and the DRRI hits the nail right on the head. Let’s make it clear – if you’re looking for a high-gain metal machine, this ain’t it! Coaxing great country and jazz tones, however, is a piece of cake right out of the box.

Doing anything that requires a fair amount of dirt is a little trickier. The DRRI may be only 22 watts, but it’s a LOUD 22 watts, with a fair amount of clean headroom before it starts to break up. To keep things in control from a volume standpoint, we’d recommend using a good overdrive or distortion pedal to meet your needs.

Some may say that the tone isn’t an exact duplicate of a true vintage model, but you really have to consider that many of the electrical components found in the original builds (caps, transformers and resistors) simply aren’t available anymore. While the DRRI sounds great, discerning players may be able to tell the difference – but that’s certainly not a deal breaker in our opinion.

The Fender ’65 Deluxe Reverb is a faithful reproduction of one of the most iconic Fender models ever produced. For something made more than 50 years after the original, it does a wonderful job of replicating the tone that guitarists adore. The fact that it does it at a decent price will make you question whether investing in a true vintage model is even worth the expense.