EVH 5150III Combo Review – A Stage-Ready Combo That Handles Anything 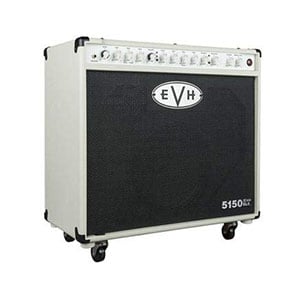 Offer most rock-inclined guitarists the chance to sound like Eddie Van Halen and they will bite your hand off (in fact, most will bite your entire arm off!). You can buy the Frankenstrat, you can buy a pedal, you can even buy an ’80s hair-metal wig – but the best way to truly emulate the legend is with an EVH amp. The combo addition to the 5150III collection is a premium amp that, truth be told, is a bit of a beast. Today we’re taking a closer look. While combo amps are popular for living rooms and bedrooms, this combo is meant for the stage. Don’t get us wrong – with a headphone jack and the option to reduce the wattage, playing it in an apartment is great fun… but it feels a bit of a waste. This is because this combo crams so much power into a relatively unassuming cab. Along with seven 12AX7 tubes in the preamp section, there are two 6L6 power tubes fueling this amp, resulting in 50 watts of super EVH power. This is all delivered through two specially-designed 12” EVH Celestion speakers.

Unlike the EVH guitars, pedals and even the 5150III amp head, this combo amp features none of the usual stripes. This is a fairly basic amp in its appearance, although very attractive with the ivory vinyl covering (a slightly more mainstream black vinyl is also available).

The cabinet itself is made from a birch plywood which features internal baffling, resulting in a greater bass response. It’s a pretty beefy amp, although transporting it is made a tad easier thanks to the two spring-loaded side handles, a molded top handle, and a set of wheels.

In terms of features, there’s plenty to get to grips with, including three channels with varying gain to really help you nail your favorite tone, along with a superb built-in reverb. The amp also comes with its own four-button footswitch, allowing you to easily control all three channels as well as the reverb, which is a godsend on stage. This combo offers a good range of controls that let you shape your tone exactly how you like it – bonus points for the inclusion of rather cool vintage-style chicken knobs. Channels one and two share the same EQ controls, with bass, middle and treble, along with gain and volume controls. Channel three enjoys the freedom of its own set of controls, while all share the same presence and reverb controls.

At the end of the panel you’ll find a very useful attenuator control, which we’ve touched upon. This allows you to turn the wattage down from an auditorium-filling 50 watts, to a less deafening 1 watt of power. Useful for quieter sessions, wherever you are playing.

Around the back sits the resonance control, along with your effects loop, MIDI control ports and even a headphone jack for when quiet practice is necessary.

Plug it in, switch it on, and prepare to be amazed at the true versatility of the 5150III Combo. Everything from jazzy cleans to melt-your-face metal mayhem are on call at the slight twist of a knob.

Starting with channel one, with the attenuator up to the full 50 watts, there’s huge headroom making way for crystal clear cleans that really sparkle. Moving onto the second channel and this delivers a great crunch spectrum – clear and biting for a decent blues tone, although adding a bit more gain is perfect for modern rock and classic metal. In fact, it’s as high-gain as most guitarists will want to go.

Of course, for those who want the heaviest sounds, this amp caters nicely. Flipping to channel three is a real treat for metalheads looking for a super-saturated sound that will deal with classic Maiden right up to modern heavy metal and beyond. Having all these channels foot-switchable, along with the option to add a quality reverb, is the icing on a rather delicious cake.

If we could only use one word to describe the 5150III, it would be ‘versatile’ (with ‘beastly’ a close second). Tonally, it excels at clean jazz, crunchy rock ‘n roll, and anything reliant on heavy overdrive – from classic EVH to distorted modern metal. Recording and practicing with it are a pleasure, while gigging with it is obviously sensational. Even for the high-end price, this amp really shows great value for what’s on offer.