Epiphone is already famous for their budget versions of classic Gibson guitars. But even by Epiphone’s standards, the new Les Paul SL model is exceptionally inexpensive. After turning heads when it was first released in 2017 thanks to its unique finish options and low price, this axe has grown to become a popular choice for beginners and modders alike.

But for all of its features, does the Les Paul SL merit a place on our list of the best electric guitars under $200? To figure out the answer, we’ll need to take a closer look at the details. 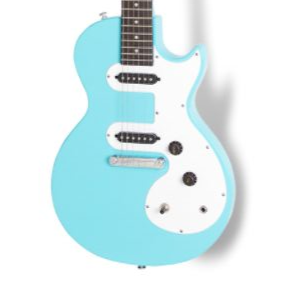 The Les Paul SL borrows most of its body shape and design from Gibson’s classic Les Paul Junior and Melody Maker models. The single-cutaway styling will be instantly familiar to any Les Paul fan (or pretty much any guitarist, for that matter).

The SL’s body is made of poplar, a tonewood often found on imported Asian axes. Unlike more premium tonewoods, which contribute their own individual character to the sound of an instrument, poplar is a relatively neutral choice and doesn’t have a significant impact on tone or frequency response.

It’s also incredibly lightweight, which makes the SL an easy instrument to carry. On the downside, it shifts the weight distribution heavily towards the neck, which can be uncomfortable for some players.

Speaking of that neck, the SL carries a mahogany D-shaped neck with a genuine rosewood fretboard. These are both uncommon to see on an instrument of this price — while they’re certainly not choice cuts of either tonewood, their inclusion is still a higher-end touch on a firmly entry-level model.

The neck is comfortable for a wide variety of players; it’s got a substantial body reminiscent of older Les Pauls without reaching the “baseball bat” sizes some vintage LPs do. It’s also bolted onto the body. A bolt-on neck would be an abomination on higher-end Les Paul models, but it’s a ubiquitous technique on sub-$200 guitars thanks to its lower cost and simpler construction.

The unorthodox finishes are another great touch here — some of the glossier colors, like neon yellow, turquoise, and blue, are not normally offered on Les Pauls. If you’d prefer a classic look, black and sunburst finishes are available as well. The SL is outfitted with a pair of Epiphone’s ceramic single-coil pickups. Single-coils are never used on Les Paul guitars — Les Paul Junior and Special axes nearly always carry P-90 pickups, while LP Standard models utilize humbuckers like vintage PAFs. The single-coil look isn’t only a big departure in terms of visual appeal; it also offers tones that are much harder to produce on traditional LP guitars.

Thankfully, the single-coils here are burly enough to mimic some tones you might get on a guitar with P-90s. While they lack some of the airy midrange and thicker attack, they don’t sound as far away from more traditional Les Paul tones than you might think at first glance. On the plus side, the single-coil setup does open up some brighter Fender-style sounds, particularly from the bridge pickup.

The routing setup is outstandingly simple. The only knobs on the guitar’s face are the ones for master volume and tone. A three-way selector switch toggles between each of the two pickups depending on your preferences. While the ABS plastic knobs may appear cheap, they turn smoothly and quietly without cutting out or failing outright.

On any guitar retailing for a low price, it’s obvious that sacrifices must be made. The hardware here bears the brunt of those sacrifices. The bridge is a wraparound unit that offers fixed spaces for strings without any flexibility to intonate the guitar properly.

That might not be a problem were it not for the soft metal alloy the bridge is constructed from — over time, it can deteriorate, and guitar strings may form grooves in the metal. Those grooves effectively lock in the spacing between strings for eternity.

The fretwork is decent for the price; quality control may not be the greatest, but sharp fret edges seem rare. String action is playable but less than ideal. A professional setup could help alleviate some of the issues, though the bridge setup doesn’t allow you to lower the action to improve the guitar’s feel.

The unbranded Epiphone tuners are a pleasant surprise. It’s easy to assume that they were made from the cheapest available metal and will probably fail to keep tuning stable. Surprisingly enough, however, they do a strong job maintaining your tuning and intonation as well as could be expected. There are certainly no glaring design flaws here.

Based on sound alone, the Les Paul SL certainly stands up to much more expensive models. On both the neck and bridge pickups, this guitar delivers attractive tones with character and bite.

The neck pickup is smooth and clear when clean, while it thickens up and delivers some serious bite with distortion applied. The bridge pickup, meanwhile, offers spunkier, snappier tones that wouldn’t sound out of place on a Telecaster. Though it’s not a traditional “Les Paul sound,” the quality is impressive for the price.

Unfortunately, the extra details don’t demonstrate the same level of performance. The volume and tone knobs are underwhelming — the volume delivers little in the way of a reasonable sweep, acting more like a binary on/off switch.

When rolled off, the tone knob creates a muffled underwater effect rather than a warm and sultry jazz tone. While it’s to be expected on a guitar at this price point, there’s just not a lot of tonal variation on tap if you’re not satisfied with keeping your tone knob cranked at all times.

Finally, you should swap out the factory strings immediately. Given the guitar’s price, these are exceptionally low-quality strings and provide little in the way of tone or sustain. Changing them out for a sturdier set can make a massive improvement in the tone of this instrument.

The Epiphone Les Paul SL is a tough instrument to evaluate for a few reasons. Given the toy-shop price point, it’s necessary to grade this guitar on some sort of a curve. The model also scores differently for different uses — beginner guitar players looking for a starter electric and more advanced players looking for a modding project have very different needs and goals in mind.

Beginners on a tight budget should check this out (though saving up just $50 more could get you a more “complete” budget guitar). Modders should generally steer clear. Though the finish options are undoubtedly attractive, the base materials simply aren’t worth enough to spend time on to improve them. In any case, you’ll spend far more on upgrade components than this guitar is actually worth.

But with all that being said, the Les Paul SL does deliver a fundamentally solid, good-sounding instrument at an astonishingly low price. Epiphone’s supply-chain wizardry has certainly paid off here.