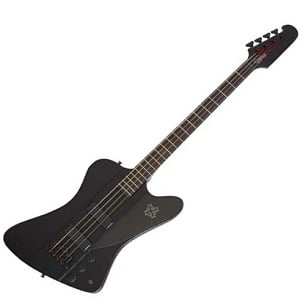 Gibson’s Thunderbird has been around for a while in a variety of shapes and styles. When Epiphone picked it up, everyone was impatiently waiting for it to hit the stores, since you could now have what is a close enough copy, at an affordable price. Epiphone Goth Thunderbird VI is one variation of that guitar, and it’s rocking. It’s different but still traditional, unique but not over the top. We think it’s one of the best bass guitars out there at the moment, and we had to include it on our top list.

As you probably know, Thunderbird is one of Gibson/Epiphone’s most popular body shapes aside from LP. It’s a rounded off Explorer shape, which makes it lighter and more comfortable in general. This bass features an all black finish and a black pick guard with a Gothic cross on it. The body is made of mahogany, which is a great choice considering what this bass was designed for. The neck comes in form of a standard maple design with a rosewood fretboard. It’s worth noting that there is only one inlay on the 12th fret.

Unlike most bass guitars in this price range, Epiphone Goth Thunderbird VI features a three-point fully adjustable bridge. It’s smaller and much less imposing compared to standard fixed bridges. Tuners come in form of Epiphone’s standard machines, which work pretty good but are nothing to write home about. All hardware is painted black and along with red details on factory strings, give this bass a pretty classy appearance.

While many would expect an active set on a setup such as this one, Epiphone decided to keep things on the traditional side of things. They’ve installed a set of two Epiphone TB-Plus humbuckers, which are wired to a basic set of controls. You have neck pickup volume, bridge pickup volume and master tone knobs to work with. Minimalist, but practical none the less.

For what is still a pretty affordable bass guitar, Epiphone Goth Thunderbird VI sound rather wholesome. Passive electronics might not have the output many contemporary ‘metal’ bass guitars have, but it brings one important thing. That is the expressive potential. You can dial in a variety of tones, within that classic scope, but they all sound rich enough for a variety of applications. It might not be the most aggressive bass guitar out there, despite the way it looks, but the tone is definitely on point for the price range.

To some, my opinion of Epiphone Goth Thunderbird VI might make it look like this bass only looks good and nothing more. That’s as far from the truth as you can go. This is a very well balanced bass guitar in a price range that leaves little room for special features. Honestly, it meets and exceeds my standards for this category. Epiphone has once again shown us what they’re capable of, and why they are one of the best in the business.