Afraid of the dark? If so, this ominous Goth Les Paul Studio from Epiphone may make you a little uneasy. However, you aren’t required to die your hair black or wear heavy makeup to enjoy this stylish axe, that boasts excellent playability and a surprisingly versatile sound for something that comes in at under $500. 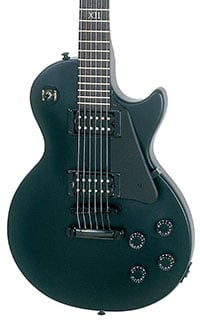 As a Gibson subsidiary, Epiphone know a thing or two about making affordable Les Paul variations, and this Goth is an excellent example, sporting the famous single-cutaway shape with a 24.75” scale length body crafted from solid mahogany. Appropriately, the Goth comes with gorgeous satin-finished Pitch Black paintwork, and matching black pickguard. It certainly looks the part, and plays very well too, with a hand-set mahogany neck, featuring a rosewood fretboard and 22 medium-jumbo frets. There are no fret inlays, which adds to the simplistic charm of this guitar, although it does feature a single XII engraving at the 12th fret. A couple of other touches, such as the Gothic cross on the headstock, finish off this Les Paul nicely.

The Goth is kitted out with the kind of quality hardware you’d expect on an Epiphone Les Paul, including a tried-and-tested LockTone tune-o-matic bridge with stopbar tailpiece – a classic pairing that offers good sustain and stable tuning, as well as ensuring string changes are simple. On the headstock, in a 3+3 configuration, you’ll find responsive sealed Grover tuners, which are another quality addition. Everything feels built to last, and confirm this is a performance guitar. All hardware on the Goth, including the bridge, output jack, and tuners, is finished in black and complement the look of this dark axe beautifully. 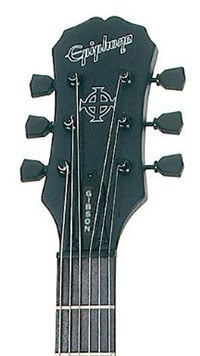 The Goth Les Paul Studio comes loaded with two Epiphone-designed open-coil Alnico Classic Humbuckers, at the neck and bridge positions. These are stock pickups, but are nothing to be sniffed at as Epiphone use quality components to manufacture them. Controlling the pickups are four 1″ diameter potentiometers control knobs – one volume and tone control for each of the humbuckers, with one doubling as a KillSwitch, which temporarily mutes the guitar and allows for awesome manual strobe effects – nice to experiment with. Finally, in addition to your controls, the Goth comes with a traditional three-way pickup selector switch, with the classic rhythm/treble ring.

Thanks to the humbuckers and tonewoods used to build the Goth, you’re able to find some pretty dark tones that are perfect for heavy rock and metal. Despite its dark looks, the Alnico Classics give the guitar a familiar Les Paul tone and are very versatile – a blues enthusiast could enjoy this guitar just as much as a metalhead (however the looks may put some off). The humbuckers provide warmth and clarity when played clean, although it’s through a distortion pedal where it truly sings – dirty and aggressive with no muddiness, and with good sustain.

Its menacing dark looks aren’t going to appeal to everybody, but for the rest of us Epiphone’s Goth Les Paul Studio – with its sleek satin finish, modern hardware, impressive sound, and affordable price tag – is a worthwhile choice.