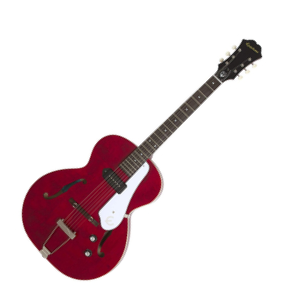 Epiphone has been a driving force behind many classic guitar designs over the years, particularly in the hollow body realm. A great example is the Epiphone Century 1966, which is a reissue of the popular thin line archtop that was initially brought to life when Epiphone merged with Gibson. 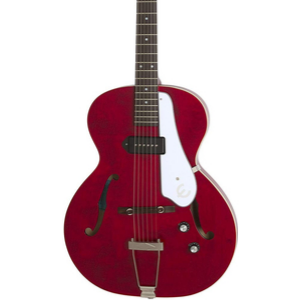 Visually, the body of the Century 1966 is somewhat similar to that of an Epiphone Casino, but it’s slightly smaller and has no cutaways. Laminate maple is used for the entire body construction (including the top, back, and sides), with the f-holes that are typical of a hollow body along with bound edges.

The neck is constructed from mahogany, with a rosewood fretboard that adds to the warmth that typically comes from a good archtop hollow body. Fret markers are nothing fancy – just simple dot inlays, and there are 20 medium frets to work with as well.

Sometimes you have to wonder, though…why have 20 frets if there are no cutaways for you to actually reach all of them? 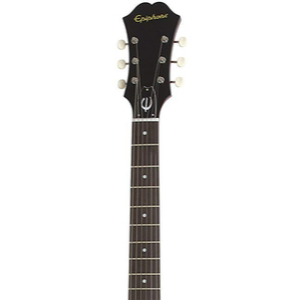 The hardware options that were available back in the 1960’s were pretty straightforward, and the Century 1966 follows suit. There is only one pickup, and it’s a P90 PRO that is mounted in the bridge position with a volume and tone knob. That’s it. Thank you – next?

The rest of the hardware is period-correct, with the bridge itself being the ‘floating adjustable’ type, and the tailpiece has the historic Epiphone trapeze design. Tuners are Wilkinson Vintage with a 14:1 ratio for precise adjustments.

Keeping with the vintage vibe, the Century 1966 has a white PVC pickguard with a foil ‘E’ in the Epiphone font. Adding to the mojo is a sound hole label that is a reproduction of the blue ones common to Epiphone models back in the 60’s.

The Century 1966 has a warm vintage tone, and it’s certainly intended to be a smooth machine, as the pickup is mounted in the neck position. There’s no screaming high-end to be found here folks, so if you’re thinking that it could be similar to Ted Nugent using a Byrdland, you just might want to look elsewhere. This is a jazz machine if we’ve ever seen one.

Since the sound is intended to be smooth, then the playability should be too, right? Right! The neck has a comfortable rounded ‘C’ shape, and pulling off both chords and complex single note lines is borderline effortless.

The Epiphone Century 1966 does exactly what it set out to do – give you a faithful reissue of a classic archtop hollow body at an attractive price point of less than $1,000. The combination of warm, vintage tone and great feel would make it a great choice for your guitar collection.

For more info about the Epiphone Century 1966, click here.
For more of the best acoustic guitars under $1000, click here.