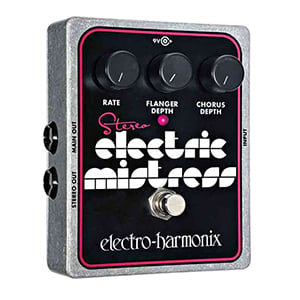 Electro-Harmonix Stereo Electric Mistress is a very interesting and unusual pedal. With that said, despite being a multi-tool of sorts, it is also one of the best flanger effects pedals you can at the moment. Let's take a closer look and find out what makes it so popular and respected.

Just like Boss has a very specific aesthetic to their pedals, so does Electro-Harmonix. It is fair to say that latter prefers a more vintage design, which is just another layer of what makes their pedals so good. Electro-Harmonix Stereo Electric Mistress features that vintage chassis and so much more. For starters, this is a flanger and chorus combo that actually works. Usually when you put two different effects in a same pedal, the results are not always that good. Needless to say, people were somewhat skeptical of this model. Especially considering it is a digital unit. In a world where analog is still regarded as the only ‘true' way of enjoying guitar effects, you could say that Electro-Harmonix took a gamble. They also covered their bases. Electric Mistress features stereo outs and a filter matrix mode. This allows you to sweep the flanger by hand. Pretty awesome stuff overall. 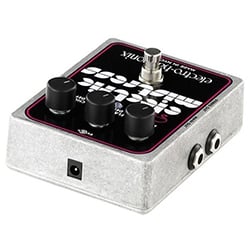 Despite being digital in nature, Electro-Harmonix Stereo Electric Mistress isn't full of various knobs and obscurely labeled buttons. That is simply not how Electro-Harmonix rolls. Instead, things are very simple. You have the Rate knob, Flanger Depth and Chorus Depth. Aside from the foot switch, that's pretty much it. Having such a clean control interface isn't just great from an aesthetic point of view, but it makes using the pedal very simple as well. The way things are set up, Stereo Electric Mistress enables you to use each of these effects on their own, but also in combination with one another. Rate pack quite a bit of range, and is sensitive to input. Not only that, but as you reach the 10 o'clock position, you enter the filter matrix mode for flanger which spans all the way to 12 o'clock position. In this mode, you get to freeze the effect.

Performance is easily one of the best things about Electro-Harmonix Stereo Electric Mistress, and exactly what made it so popular. The sole idea of a high end digital effect was enough for many to roll their eyes. However, when Electric Mistress rolled out, those eyes were fixed at it. Compared to the Deluxe Electric Mistress, which is truly analog, this pedal doesn't compare 100%. Even so, it is easily better than 90% of other flangers out there. The effect is oddly organic and packs much of that analog vibe. The same can be said about the built in chorus. Add to that the stereo output and you have a very capable tool at your disposal. Using the pedal in a live setting is extremely easy. Since there are no complex controls, you can pretty much access everything and make whatever adjustments you need to on the fly.

Despite the odds, Electro-Harmonix Stereo Electric Mistress came on top as one of the best flanger pedals on the market. It's digital, but that's a badge of honor for this bad boy. In some ways it hints that digital is slowly catching up to analog and a very bright future.