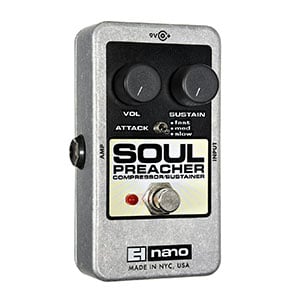 If you happen to be after a simple and easy to control guitar compression pedal that can easily secure a quality sound, do give the Soul Preacher from Electro Harmonix a look.

Made right in the New York City, USA, this pedal combines the best of modern technology and traditional vintage vibe. Time to dive into those neat details now!

The device comes in a grey metal casing that looks and feels sturdy as a rock. The second thing that stands out is the seeming lack of controls – just two knobs and a single three-way switch. We were a tad suspicious towards such approach, but were thankfully proven wrong soon after plugging the pedal in.

Apart from that, the inner circuits of this device stand out as one of the key factors in locking in a killer sound and truly do a major portion of the work. The gizmo operates as a mono pedal with one input and a single output, along with standard stuff such as a LED status indicator and an on/off button. It can be powered via classic 9V adapter, weighs in at 10.4 ounces and features total dimensions of 5.8 x 2.8 x 3.5 inches. 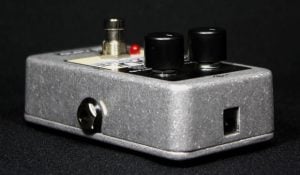 Let’s have a look at those seemingly scarce knobs now, shall we?

Volume – As one of the obligatory controls of the majority of pedals we can think of, the Volume (also known as Level) knob adjusts the level of the given effect that’s present in the mix. In this specific case, the more you increase it, the more compressed sound and less clean guitar tone is included in the final output.

Sustain – To adjust the amount of compression, use this. The more you crank it up, the more compressed and single-lined your tone will become.

What stood out upon the very first strum is the sustain length and quality. The note just seemed to go on forever! Additionally, the tone always remains pretty organic and natural-sounding, and seeing that we’re not fans of that artificial compression sound, that worked very well for us.

If you happen to use distortion or overdrive during your performance, we also recommend this fella as it really picks up the essence of the gain drive and boosts the attack to the next level. But regardless of your musical preferences and playing style, the Soul Preacher will always do its main job flawlessly by giving frequencies that are too low in the mix a nice boost and cutting down the ones that are over the edge.

In a nutshell, this is one very good deal! We haven’t mentioned the price too much, but this thing works as good as pedals that are at least 50% more expensive, and that is no mean feat. If you’re not the type of player who likes to explore those endless tweaks, but rather lock in a good sound ASAP and continue with playing and sonic experimentation, this Electro Harmonix dude is the pedal for you. Good stuff!