Electro Harmonix Micro POG Review – The Other Side Of The Coin Electro Harmonix Micro POG, or Polyphonic Octave Generator, is the second octave pedal this brand offers, which also happens to be on the leading edge of the market in this segment. It's been around for a while, and it was proven to be one of the best octave pedals currently available.

With that said, this is not your standard octave effect. It's a bit niche oriented towards a very specific application, but even so manages to stomp over most of its competition with pure ease. Today we are going to give you a brief review, and try to show you just what kind of performance you can expect from this awesome octave pedal. 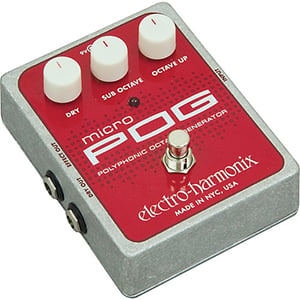 One of the more surprising things about the Electro Harmonix Micro POG has nothing to do with the way it works, but rather the way it looks. Electro Harmonix is known for their minimalist approach to pedal aesthetics, and when they do step away from that policy, you can usually expect vintage designs.

Not Micro POG, though. This one looks surprisingly modern for EH. The enclosure is tough as you would expect. The top panel is where your controls are, which are pretty intuitive and easy to use on the fly. In terms of controls, you are looking at a relatively simple layout. There are three knobs used to adjust the parameters of the pedal, and a standard high quality stomp switch.

The best thing about the Electro Harmonix Micro POG is the fact that you get a very capable polyphonic octave effect that gives you an impression that you are playing a 12 string instrument instead of a six string one.

On top of that, it also has super fast tracking, meaning that you can play chords, arpeggios and other complex forms which simply wouldn't be possible to pull off on a regular octave pedal. That type of performance is exactly why this stompbox is so popular these days. There's just a not much like it out there.

Overall, Electro Harmonix Micro POG brings a different type of experience than what you would usually expect to see on an octave pedal. With that said, you will need to apply this effect pedal a bit differently than your regular octave stompbox, but that additional caution pays off exponentially once you strike a chord and it sounds natural on one hand, and completely undistorted on the other.

You can probably imagine all of the uses you can have for this awesome little box of magic. Sure, it's not the cheapest pedal and it does require a bit of budgeting, but the investment is definitely worth it.