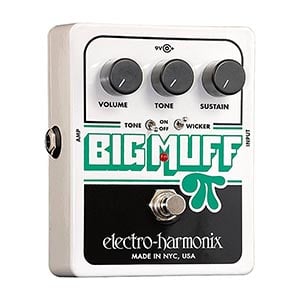 When it comes to fuzz pedals, there is one model that is so popular that even those who don’t like this type of effect are simply too curious not to try it out. Electro-Harmonix Big Muff Pi has been around for decades, and it’s one of the elite effects pedals you would find in a fictional all-star pedalboard.

Just how big of an impact this stompbox has on the industry can be concluded from the fact that a good majority of modern fuzz pedals are based directly or indirectly on Big Muff Pi circuitry.

It’s not the first fuzz pedal, nor is it the best at the moment, but Electro-Harmonix Big Muff Pi is still the big daddy that rules over all of the other legendary fuzz pedals. Today we’re going to find out where this reputation comes from. Modern effects pedals are mostly built to follow that standard Boss format. Back in the day, things were very much different. Electro-Harmonix Big Muff Pi is one big sucker that isn’t too light either. The enclosure is made of a quality metal alloy that is capable of taking the type of beating only a heated rock stage can deliver, and walk away unharmed.

Graphic design is as vintage as they come, and hasn’t really changed since this pedal was first released. When it comes to specific features, you are looking at a very simple circuitry with equally as simple exterior layout.

There are three knobs on the top panel aside from the stomp switch, but the one thing that is really worth mentioning is the true bypass. So many modern pedals don’t offer this critical feature. The whole thing is powered by a 9V battery, or a 9V power adapter, whichever you think works better in your setup. As we have mentioned just now, you have three main knobs to work with. Volume is pretty self-explanatory, and it regulates your master level. The Tone and Sustain knobs are where all the fun is at. Former is what you use to set the level of distortion in your signal.

Crank it all the way up and you get that heavy fuzz, roll it back down and things become more civilized. Tone knob takes you anywhere from bare-bones fuzz on one end, and increased low and with a bunch of gain on the other.

Vintage rough fuzz is what this pedal is all about. The tonal variety you can dial in spans across a wide range of possibilities, which will keep you occupied for quite some time. It’s a noisy pedal that packs a decent punch when you start messing with the tone knob. However, roll it back down and you are in safe territory again.

Even after all these years, Electro-Harmonix Big Muff Pi is still one of the go-to effects pedals that never fails to deliver. The variety of tones and its vintage nature were things many have tried to reproduce, but only a few ever managed to do so. If you want to get into fuzz pedals, this is your gateway model.