For many guitar players, EarthQuaker Devices is a name that is synonymous with some of the best effects pedals you can get today. That type of reputation is not something you build overnight. With that said, EarthQuaker Devices Tone Job EQ is a very interesting solution from an otherwise no-nonsense brand. It's an EQ pedal with an identity crisis.

On one hand, we have a great EQ section but on the other, it feels like a booster primarily. Even though these two roles are not mutually exclusive, the pedal is still somewhat bipolar. However, that doesn't mean it fails to do either of these two jobs well. On the contrary, it's killing it in both roles which makes it one of the best EQs in the business right now. 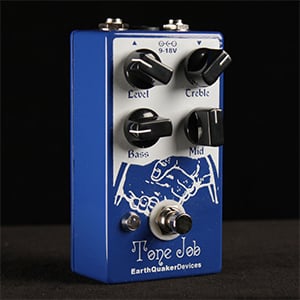 When you look at the Tone Job EQ, it comes across like a very standard boutique design. It doesn't look like an EQ, at least from some distance away. However, once you start reading the specs it becomes obvious that you are dealing with a true force multiplier.

The pedal is designed in a way that allows it to work great with guitars, bass guitars, and even other instruments. On top of that, you can power it with either a 9V line or an 18V one, depending on what you have available. EarthQuaker took a rather basic route when it comes to controls. To be more specific, there are only four knobs available along with the on/off foot switch. First comes the Level knob, which we will discuss deeper a bit later, and then you standard Treble, Mid and Bass knobs. Using only these four controls you can do a lot to your tone. You will be amazed when you realize just how much finesse is possible with such a rudimentary interface.

What really puts this pedal on a new level is the fact that each of the three band EQ knobs packs additional 20dB of boost or cut. That's a lot of power just in the EQ section of the pedal. The volume knob we have mentioned earlier is a completely different story.

It alone can multiply whatever settings you have running on the pedal, as much as five times. That means that the boost is not limited by the Level knob, but rather multiplied. Needless to say, that is enough juice to push even the most reluctant tube amp into that sweet overdrive.

Even though it's a bit more than just an EQ pedal, and the fact that a lot of its owners use it as a pure booster, EarthQuaker Devices Tone Job EQ is a force to be reckoned with.

The price is set in a way that makes this pedal too tempting to ignore and is rather impressive considering the fact that it's a boutique model with a lot of power packed under the lid. If you don't feel like dealing with complicated EQ controls, this is the model for you.