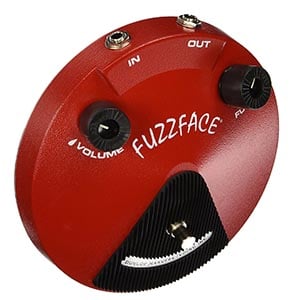 Vintage fuzz pedals that have found their way into the pedalboards of some of the most iconic guitar players in the history of rock are not that numerous. One of the most notable ones has got to be the Dunlop JDF2 Fuzz Face, for a number of reasons. Compared to Big Muff Pi and other great fuzz boxes, this one saw some pretty unique action in its time.

Not only was it used by the likes of Jimi Hendrix and David Gilmour, but Dunlop JDF2 Fuzz Face managed to remain true to its original form for all these years. The one you can get right now is a reissue, but the core of the pedal is still there. One of the most interesting things about the Dunlop JDF2 Fuzz Face has got to be the enclosure. It’s one of the rare disk-shaped pedals, since this shape was completely dropped later on. The reissue model comes in distinct red color, and is packed full of germanium components.

Considering it comes with two knobs and one switch, Dunlop JDF2 Fuzz Face wastes a lot of real estate for no real reason. However, its shape is an important part of its appeal. With that said, no matter how crazy it looks, it is still one of the most successful examples of vintage fuzz revamped with a lot of success. For such a big pedal, Dunlop JDF2 Fuzz Face come with just two control knobs. It’s a pretty straightforward configuration. One is the volume level knob, while the other regulates the amount of fuzz you want to apply to your signal chain. This configuration might sound too basic for us today, but when it first appeared back in the ’60s, this was all you really needed to get one of the best fuzz tones ever made at that point.

Since it’s a germanium based pedal, and one that uses vintage PNP transistors, Dunlop JDF2 Fuzz Face gives you a pretty distinct vintage tonal range. Even with its rudimentary controls, you can still dial in a great range of tones if you know what you are looking for. The sound of those germanium transistors is just as inspiring as it was back in the day.

Those who are looking to get the authentic Jimi Hendrix tone should have one of these in their collection. It may not be the original Fuzz Face, but it offers a lot of that same tone Overall, Dunlop JDF2 Fuzz Face is a pretty capable fuzz pedal, even by modern standards.

There aren’t many practical reasons to chose the Dunlop JDF2 Fuzz Face over some other pedals which are available. However, we have to admit that using the Fuzz Face is a pretty unique experience.

This is one of those fuzz pedals that really takes you back into a time when things were just a little bit simpler in terms of guitars, and guitar tone. With that said, this is a great model for those looking to get started with fuzz effect, but want to get a true piece of history that just so happens to sound good as well.