Donner's Boost Killer is a pedal that has gone mostly unnoticed until recently. Its critics will say that it's an Xotic RC Booster clone, but that isn't completely true. These two pedals are definitely similar, but both have their own place in the world. Boost Killer is often said to be one of the most aggressive boost effects on the market, and it's really hard to disagree with this opinion.

It packs a lot of heat for what is essentially an extremely affordable effects pedal. For that reason alone, it's among the most attractive boost pedals on the market today. Should you decide to wet your feet in the world of boosters, this model could be a great starting point. 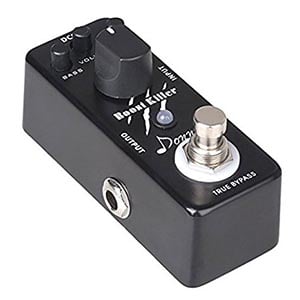 Once you pull it out of its box, Donner Boost Killer doesn't look like much. It's small, light and looks rather average for the most part. However, looks can be deceiving.

The pedal comes with a bit more generous controls compared to your standard booster design, and it features true bypass. Some have questioned this mostly because of the price of this unit, but it seems to be true as far as we can tell. The guitar comes with a standard stomp-switch and pretty decent components. The top panel of this pedal is dominated by the Gain knob. This is Donner's attempt to keep the Boost Killer in line with the standard booster design. Above that knob there are three smaller ones – Bass, Volume, and Treble. For the most part, if you only need to add some clean boost to your signal, you will use the Volume knob.

Bass and Treble knobs act as a limited EQ, while the Gain knob infuses the boost with pretty crunchy overdrive. Overall, it does look similar to the Xotic RC Booster in terms of controls, but the tone you get is a bit different.

Donner Boost Killer is one of the more aggressive boost pedals on the market, that is a fact. It lacks finesse when you use it as a clean boost, although its performance is definitely acceptable.

Once you add a layer of gain, the resulting overdrive is robust but ultimately organic. With that said, this is not an overdrive pedal in the standard sense of the word. If you want a more saturated overdrive effect, you can get pretty awesome results if you boost your amp's OD channel with the Boost Killer working in the background.

Most guitar players will tell you that price is not necessarily an indicator of quality, and that is definitely true. Donner Boost Killer offers a great bang for the buck that you will be hard pressed to find elsewhere. Is it the best boost pedal ever? Not really, but it's pretty close when you put it into context.

For that reason alone, it's currently one of the hottest models you can get. Those who are able to deal with a less polished package will simply love this pedal. It's a rugged unit that needs some attention if you want it to reach its fullest potential.