Diamond Pedals is another boutique shop who has decided to tap into the tremolo market with a rather unusual model. Their tremolo stompbox brings that standard vintage trem effect, but with a few spicy additions to the control panel.

What makes it one of the most used tremolo pedals is the integrity of tone it is capable of providing, and the fact that its circuitry is 100% analog. In the sea of digital pedals, having a fully analog unit is a rare and awesome experience. Let’s find out what this bad boy has to offer.

What Diamond Pedals created is truly an awesome tremolo design. It comes in a wider body, just like most of its counterparts from the boutique segment of the market. Their choice of graphics reveals a rather simple theme that definitely won’t win any prizes, but aesthetics are not really the most important factor when judging guitar effects pedals.

In terms of circuitry, you get a very conservative analog signal path that is combined with a micro-controller tasked with modifying the effect. It’s an interesting combo, but also one that brings much-needed innovation to this old guitar effect. 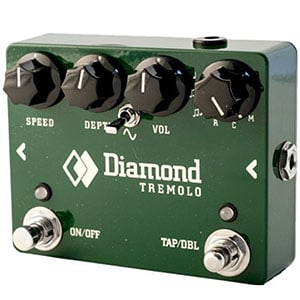 When you look at the controls that come with this pedal, they look somewhat average. However, the options they offer are anything but. Starting from left to right, we see the Speed knob. This is your standard frequency adjustment control that allows you to dial in faster or slower tremolo effect. It’s followed by Depth, which is another standard control on tremolo pedals.

Next is Volume that adjusts the level of the effect, and finally there’s a mode knob. This control offers a selection of timing accents such as the 2/4, 3/4 and so on. It also includes something called Chaotic mode. Once that is engaged, the pedal will select random speeds and waveforms. Speaking of which, there’s a waveform select switch available with four different shapes you can choose.

Diamond Pedals wanted to create a vintage style tremolo pedal that would give its users that old school trem effect in its most authentic form. However, they also wanted to spice up the deal with a selection of truly awesome features. The final result is a pretty capable old school tremolo that you can use to infuse your guitar’s tone with a high level of versatility.

While it’s not the most affordable tremolo on the market, Diamond Pedals Tremolo is by far one of the most authentic and capable models you can get at the moment. What appears to be a simple trem stompbox is actually a pretty versatile little unit that offers some unusual options you would be hard pressed to find elsewhere.

Whether or not this type of character is going to resonate well with the majority of users is up for discussion, but this pedal brings a breath of fresh air into a segment of the market that has already begun to go stale.