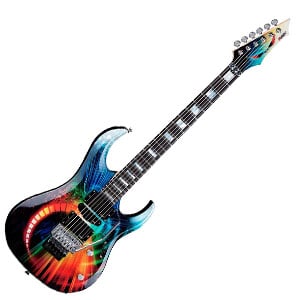 You don’t have to know the epic work of Michael Angel Batio to enjoy one of his many signature guitars – the MAB1 Speed of Light, from Dean. However, it’s worth accustoming yourself with the legend of metal – the fastest shredder in the world, but one who still manages to make beautiful music, not just fast for the sake of it. This delightful signature model is one of Dean’s higher-end offerings and proves a very popular guitar for metal. Let’s take a closer look… Just like MAB himself, this is one fast guitar. Dean has worked closely with the shredder to ensure it’s more than just his name on the headstock. This has resulted in a beautiful guitar being made to his specifications. Let’s begin with the neck, which is made of maple, cut super thin and slightly rounded, which gives a very comfortable hand-feel. And yes, it’s ultra-fast to play. This neck features an ebony fretboard, 24 jumbo frets and pearl block inlays.

The well-beveled ‘Batio’ body of the MAB1 is made of alder and offers two cutaways for superior neck access – considering the majority of MAB’s works is done in the higher registers, this makes sense! Finally, we can discuss the gorgeous paintwork, which is a killer Speed of Light custom graphic. It’s incredibly eye-catching with its multitude of colors, which spans into the painted headstock. As for fit and finish, the South Korean craftsmanship is very good, which is no less than we’d expect from Dean, who have a great reputation especially in this higher-end price range. When you are playing at the speed of light, you want all your hardware to feel reliable and performance-enhancing, and the MAB1 delivers in this respect. It’s voiced by three excellent EMG pickups for huge versatility. There’s an EMG 85 humbucker at the neck, with an EMG 81 at the bridge, both sandwiching an EMG SA single-coil in the middle. These high-output active pickups are tended to by simple chrome-dome control knobs for master volume and tone, with a five-way pickup selector switch.

You’re not going to replicate the sound of MAB without a tremolo bridge and the MAB1 offers an excellent sturdy Floyd Rose 1000 bridge with a Floyd Rose R3 locking nut for superb tuning stability, although – should you need to tune up – you can do this via the Grover die-cast tuners. Throw in a very good hardshell case and this MAB1 offers great value.

It’s pointless having a beautiful guitar which plays like a dream if it doesn’t pick up every single note – this one does. The trio of active EMGs give you the power and articulation that is required for both MAB’s signature style as well as all other metal playing. The single-coil in the middle gives even more tonal scope than other metal guitars in this price range, but it’s the humbuckers which really impress with a high-output, big distorted tone and a consistent crystal clarity. It’s not the warmest when it comes to clean tones, but when distorted it’s a real beast.

If you’ve read this review you’ll know how much we love this guitar. It’s a higher-end model, so we expected great playability, style and sound, but the overall package just seems to punch that little bit harder. For replicating – or at least trying to replicate – Michael Angelo Batio, or for many other styles of heavy rock and metal, the MAB1 should be one of the first on your shortlist. Awesome.

To see the MAB1 in action – played by the man himself – check out the video below: