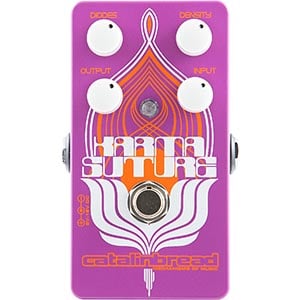 When Catalinbread decides to make a new effects pedal, the whole industry pays close attention. This company simply delivers some of the best-made pedals, both in terms of component quality and tone quality. Same applies to their Karma Suture Harmonic Fuzz.

When placed along some of the most popular fuzz pedals you can think of, Karma Suture offers a somewhat different performance that has a lot of quality of its own. With that said, it’s a bit confused in terms of its true nature, but that’s how we like them.

Catalinbread pedals are known for their whacky design and Karma Suture is no exception. Judging by its name, the graphic they went with has a distinct Hindu vibe going. The overall format is standard, so there won’t be any compatibility issues for those who have developed pedalboards.

The circuitry design is pretty unique and doesn’t really look like anything else on the market. In its very center, you will find an odd combination of transistors. Namely, there’s one NOS PNP germanium unit coupled with a PNP silicone one. By all standards, Catalinbread Karma Suture Harmonic Fuzz is a hybrid fuzz pedal. Aside from making awesome boutique effects pedals, Catalinbread is also known for naming their control knobs in ways that leave you wondering what they meant. Seeing some normal designations on this fuzz box came as a refreshing surprise. There are four knobs to work with, and they include Diodes, Density, Input, and Output.

Input and Output are pretty straight forward. The former controls the gain, and the latter is your volume control. Density adds a lot of bass frequencies, thus increasing the distortion. Diodes knob lets you adjust the compression levels, which again has an effect on the nature of the distortion.

Put in simple terms, Catalinbread Karma Suture Harmonic Fuzz offers a very, very wide range of fuzz. When you dial in a neutral configuration, you get a great vintage tone. However, the maximum limit for either of the extremes is hard to reach without drowning the signal completely.

Once you get familiar with what this pedal can do, you will have no problem dialing in a whole array of different fuzz tones that can be used in just about any genre of music, including jazz. The combination of germanium and silicone transistors adds a different flavor to the tone. You can have that warm and round germanium fuzz, while there’s also sharpness in there, which is standard stuff for a silicone based fuzz.

Overall, Catalinbread Karma Suture Harmonic Fuzz is by far one of the most versatile fuzz stompboxes on the market. You get that trademark Catalinbread out-of-the-box flavor and a performance that will keep up with whatever you’re trying to pull off. Is it a standard fuzz box? Definitely not. Purists might not like this one. However, if you’re all about experimenting with sound and trying new things, Catalinbread Karma Suture Harmonic Fuzz will definitely be worth your time.