As far as loop pedals go, we can confidently say that Boss stands out as one of the top manufacturers of these devices, and their RC-3 Loop Station model happens to be a device that hits the sweet spot between high quality and affordable pricing, as well as advanced functions and ease of use.

Coming with a compact design and signature Boss sturdy metal casing, this item sums up the needs of the vast majority of looper users out there. We took it out for a little spin, you can find our conclusions in the full review below. 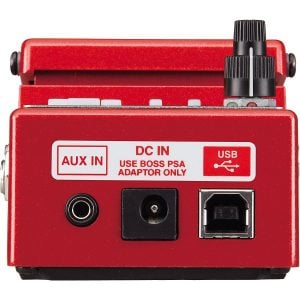 As noted, we are looking at classic Boss casing with a sexy red finish. The pedal is strong, most definitely road worthy, and highly reliable even in the long run. It operates a stereo device with two inputs and a pair of outputs, allowing the player to plug in a separate microphone and add a whole other instrument into the loop, as well as operate with stereo rigs.

The device comes with a large internal memory capable of storing up to three hours of stereo-quality footage through 99 built-in memories slots. Also included in the mix is a rhythm guide with real drum sounds, as well as a USB 2.0 port for connecting to a PC and import or export .WAV-quality audio.

Another advanced feature most definitely worth mentioning is tap tempo – an option to manually set the loops tempo by tapping it through the footswitch. Finally, a five-year Boss warranty is also included in the price. 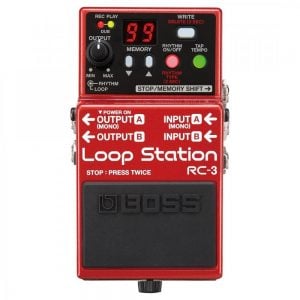 As far as controls go, we like how the manufacturer managed to spread the footswitch-related functions around despite utilizing just a single footswitch (the massive thing in the front). So the big button is used for starting the recording (one tap) and stopping it (two taps). To allocate a memory slot to a loop recorded, the player is given two buttons to select one of the 99 available spaces.

There’s also a separate button for locking the melody into the desired memory slot, which also operates as delete button if pressed longer. Finally, the Output knob is there to determine the level of the effect’s audio presence in the mix. Also included in the mix is a special input jack for connecting an extra footswitch to separate the stop or memory shift feature.

When it comes to audio quality of loopers, an important segment is that the recorded part sounds natural, organic and not too plastic. The RC-3 definitely meets those demands with a clear sonic punch and easy to use controls.

What we like about this device is that the quality of rhythm tracks is on high level, which is not a frequent case with smaller stomp-boxes like this. The listed 3-hour recording time is way more than most players need during a show, and more than enough for storing a significant database of loops.

For the listed price, the RC-3 offers a killer sonic punch. It takes the essential looper function of recording and looping tracks, and then infuses it with the biggest advanced functions such as stereo inputs, internal memory, on-board drums, and more. This pedal covers the needs of absolute majority of players out there, and as long as you are in need of a loop pedal you simply cannot regret making this purchase.