When it comes to guitar effects pedals, Boss is probably the most recognizable name in the business. Seriously, you can go to just about any corner of the world and if they have an electric guitar, they will know about Boss.

With that type of reputation, it is no wonder that a company of such caliber makes some of the most legendary stompboxes we have had the privilege to use. Among those, you will also find the Boss PH-3 Phase Shifter pedal. For the most part, this was among the first game-changing phasers with adjustable stage feature, and that was something. If you know what any Boss pedal looks like, you have seen them all. The only difference is in the color of the enclosure. Boss PH-3 comes in dark green, and aside from that, is almost identical to any other Boss pedal.

However, it’s about what hides within that matters the most. PH-3 comes with tap tempo among other things. One of the defining features is the ability to use an external expression pedal in combination with the existing effect. That is something you don’t often see, even on modern phasers. 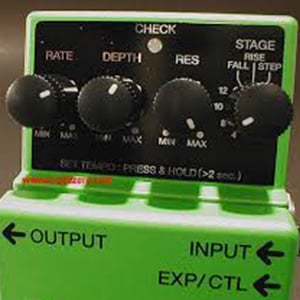 In terms of controls, Boss PH-3 was among the most versatile models for a long time. Aside from being able to select the speed or frequency of the phaser effect, you could also adjust the depth and resonance. However, the main benefit of this phaser comes from its stage select knob. Stage dictates how much your signal is shifted.

At the lowest numerical setting, you will barely notice the shift, but as you approach the highest level the points of phase shifting increase. The controls on the Boss PH-7 have inspired a number of other pedals and considered to be the golden standard for modern phase shifters.

Boss PH-3 is a very accurate and clinical phaser effect. That is the best way to describe it no matter how much some folks would like to think it’s warm and natural. Sure, it’s not the artificial sounding phaser everyone wants to avoid, but it’s not on the analog level of warmth.

With that said, the added layers of versatility really bring out the true potential of this unit. You can do just about anything phaser related with one pedal alone. For most users, that is more than enough.

Boss PH-3 belongs to the category of effects pedals which are considered to be the golden standard in their category. A number of great phasers have been modeled directly, or inspired by this Boss unit. However, being the prime target of copycats is nothing new for this company.

One thing is definitely certain at the moment. You will hardly find a better balance of price and performance in the world of phaser guitar effects pedals. The only question is whether or not you are attracted to the more analog tone color, or you are open to more clinical solutions such as this one.

For more info about the Boss PH-3, click here.
For more Phaser Pedal Currently On The Market, click here.