Boss has been in the business for long enough were you can expect them to have a solution for whatever you can think of. With that said, when it comes to bass effects, BossODB-3 is easily among the best dist pedals you can currently get for your bass guitar. 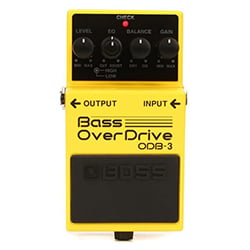 Like most of their guitar and bass guitar pedals, Boss ODB-3 comes in that classic Boss chassis. This time around it is a bright yellow one. The build quality of Boss pedals is probably the one thing you should worry about. These things were tried, tested, abused and misused for decades now. In other words, chances of ODB-3 giving up on you are slim to none. When it comes to powering the pedal, your choices are the same as always. That means either a 9V battery or a DC adapter. It is worth noticing that ODB-3 isn’t a noisy pedal, which is something many were concerned about. Lastly, since it features the classic Boss chassis, you won’t have issues mounting this thing on a pedalboard. Despite its rather simple look and flashy aesthetic, Boss ODB-3 packs one of the meanest drives you can hook up to a bass guitar. The control interface on Boss ODB-3 is definitely one of the more interesting ones. Going left to right, we first see the Level knob. Then comes the EQ which is a two-band type. Boss used their dual purpose knobs, thus saving some space on the pedal. Next comes the Balance knob which dictates how much of the effect is going to be fed to your signal. Lastly, there is your Gain knob. Overall, you could say that ODB-3 is very much standard in terms of controls. That is something we have grown to appreciate about Boss. Their pedals aren’t hard to figure out and often times follow a very standardized layout. The only issue you might have is adjusting that EQ while on stage. However, dual purpose knobs are just something you need to get used to. They are uncomfortable at first, but things get better with time.

Even thought Boss has labeled this pedal as an overdrive, there is so much gain in there to give you a proper fuzzy tone. One of the best things about ODB-3 is the fact that it works great when you need subtle amounts of drive in your tone. On the same note, it retains both composure and definition even when you decide to unleash massive amountsof gain into your signal. It is easily hotter than some distortion pedals out there. Being able to adjust lows and highs is probably the key feature of OBD-3. It makes it much easier to dial in a great sound no matter what kind of bass you have. Since it is a standard Boss package, chances are you are more than familiar with its ins and outs. In other words, it is a simple pedal to use both on and off the stage.

Boss ODB-3 might feel like a pretty basic pedal when you first see it, however it’s anything but that. The sheer amount of gain makes it a proper choice for those into heavier genres of music. With the addition of a great two-band EQ, Boss OBD-3 offers plenty of range.