Boss has always been that go-to brand when it comes to decent guitar effects that will get the job done. You could say it's the patron saint of guitar player everywhere around the world. The one we'd like to introduce you to today is their EQ unit that goes under the name of Boss GE-7.

Whether or not it's capable of competing with more refined boutique models depends on how demanding you are, and how capable you are at recognizing subtleties in terms of tone. This isn't to say that it's a crude tool, but rather a more robust solution for those who are operating on a tighter budget. It didn't take long before Boss GE-7 became one of the most popular EQ pedals to date. If you have seen a single Boss pedal, you have pretty much seen them all. This could have been the case with the GE-7, but that graphic EQ section on the top is breaking the narrative. Those looking for a feature packed model don't need to waste their time with this Boss design.

The GE-7 is a real working man's EQ that brings just what you need to get the job done, and none of those pesky options which are not often used in many cases, and are more distracting than anything else. To its defense, some of the best guitar effects pedals are often times simple in nature. 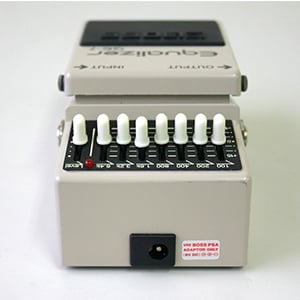 As we have mentioned before, this is a 7 band graphic EQ. The top part of the pedal is where you will find the corresponding sliders. In addition to the seven bands available, you also have a master level slider to work with. The boost and cut capability is operating within the -15dB to 15dB range. That might not be the most powerful boost you can find, but it's more than enough for most applications. The sliders are rather precise and tactile. You can easily adjust them on the fly, even in conditions with low light.

This somewhat robust design offers a great performance that has been tried and tested numerous times by now. The bands available are pretty versatile even for more aggressive genres of music, while they work flawlessly when you need to shape the tone of an acoustic electric guitar.

When you hook it up to a signal chain that leads to a tube amp, you can play with the tubes in some pretty interesting ways using nothing but the bands available. This pedal stacks wall on top of amp's on-board EQ, while it's more than capable of giving you that natural overdrive by pushing the tubes beyond their specs.

There's a rather extensive list of musicians who will have one of these Boss stompboxes on their pedalboard, even though you could say their tones are a bit more specific. One name that comes to mind is John Mayer. Affordable EQ pedals are not always that great, that is for sure.

Even though Boss GE-7 isn't really that cheap, it's still punching above its price range with a lot of headroom to spare. Those looking for a simple graphic EQ are going to love this capable little white box.