Boss DS-1X Review – A Classic That Keeps On Giving

Boss DS1 is probably one of the most iconic pedals ever made. However, despite popular belief, DS-1X is something completely different. Today we are going to show you why Boss DS-1X is one of the best distortion pedals for metal you can find right now.Lets take a closer look. 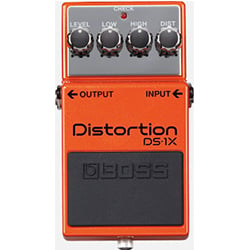 They say that if you have seen one Boss pedal, you have pretty much seen them all. That is definitely true for the most part. Boss DS-1X shares that same chassis that Boss has come up with a long time ago. Since they color code most of their pedals, it isn’t hard to see why so many people confuse DS-1X and DS1. It does feature a slightly different orange finish, but it is almost too close to the legendary DS-1. With that said, one look at the controls will tell you it is a completely different pedal long before you ever plug it in. Just like it is the case with other models that share this chassis, you can power Boss DS-1X either by using a DC adapter or a 9V battery. In terms of build quality, this platform has been proven times and times over. 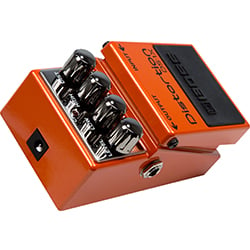 When they designed DS-1X, Boss wanted to keep things as simple as possible. Looking at some of the models that they have released not so long ago, this simplicity comes as a breath of fresh air. Generally speaking, you get your standard Level and Gain knobs, in addition to a two-band EQ. Those of you who are really into scooped mids might dislike this, but the selection of controls is partially what makes this pedal so awesome. Level is fairly self explanatory, and so is the Dist which is our Gain knob in this case. Low and High have a lot of range, although they don’t really overlap that much. Once you start fine tuning your tone, that lack of a Mids control knob starts to become rather apparent. Even so, DS-1X is pretty responsive and user friendly. It takes some getting used to, but nothing out of the ordinary.

What does this pedal sound like? This is the ultimate question for sure. If you are after a high gain, thick distortion, you will probably end up disappointed. In the world of distortion pedals made for metal, there is a variety of formats to choose from. DS-1X happens to be on the more tamed side of things, but it is a beast nonetheless. If we had to put it some sort of brackets, we would say it is a perfect ’80s metal box. Think of Van Halen tone with a bit more clarity and sparkle in the trebles. Overall, Boss DS-1X responds well to both single coils and humbuckers, making it a viable choice for a broad range of users. It isn’t as hot as some would like it to be, but it has its own character that we have grown to like.

Boss DS-1X is perfect bridge between the classic DS-1 and the in-your-face modern distortion. It is simple, reliable and consistent. Whether you are into more classic metal sound, or you want something that has a bit of a bite to it, Boss DS-1X will absolutely deliver day in, day out.