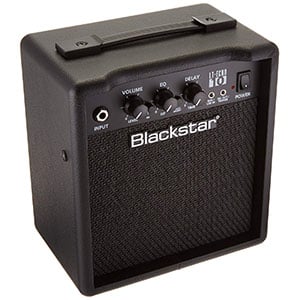 Today we are taking a look at the LT-ECHO – an interesting little practice amp from Blackstar. With just 10 watts of power and a petite build, it’s obviously an amp aimed at beginners on a tight budget. However, Blackstar have added a few features that are typically not found on amps of this price. Let's find out why we are branding it one of the best guitar amps under $100. 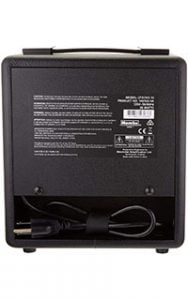 The first thing to note about this amp is that it’s a dedicated practice amp and weighs just under 7lbs, so you can take it just about anywhere with you. Being so small, you may be expecting one speaker, but this one is loaded with two 3″ speakers. So, if you use the line in, your MP3 backing tracks will sound great.

It's a simple two-channel amp, with one clean and one overdrive channel, but what sets it apart is Blackstar's patented Infinite Shape Feature. This feature gives you the choice between British and American sounding tones, which you don't usually get in lower-priced amps.

Another feature usually reserved for more expensive amps is the digital tape delay FX. If you are a beginner, you'll learn that this is a widely used effect and you'll have endless fun experimenting with it.

Lastly, there is an emulated line out for headphones, or even sending the signal to a PA/interface to record. The difference between this and a regular headphone jack is that Blackstar has optimized this technology to achieve the best quality recording possible. 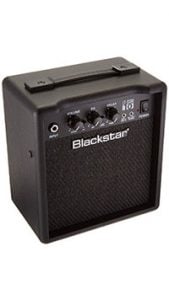 Being such a small amp, the controls are pretty limited. First, you have a master volume control and channel switch for clean/overdrive – pretty self-explanatory. Next, there is a simple EQ control for the patented ISF we mentioned. Finally, you have delay controls for the digital tape delay FX which consists of an on/off button and rotary dial.

These are all located on the front of the amp, which is pretty standard for amps in this budget price range. This is a good time to mention that there is also a 15-watt version of the LT-ECHO, which shares the same core controls.

We are very impressed with the sound of this amp, especially when it comes in at under $100. Much of this is because of the ISF EQ, which makes this amp much more versatile than most of the competition.

The clean channel is very nice and it feels like the sound you are putting in is what you are getting out, so no complaints there. Once you start to add the EQ and FX you can really shape your tone and bring it to life.

The overdrive channel is also very solid. It's not going to rival more expensive or larger amps in terms of complexity and power, but it always feels under control. Sometimes cheaper amps suffer with overdrive that sounds far too timid or far too aggressive, but this feels nicely balanced.

This is a practice amp at the end of the day, so it's not going to rock out a main stage, but for practice or even small open-mic situations, it's perfect.

Blackstar have been making amps of all kinds for a long time, so they know what musicians put them through. Despite being small and portable, this amp won't fall apart with a few bumps – try not to though!

For the price, there are absolutely no complaints from this amp. Blackstar would need to be asking over double the money before we would question it.

It's a fantastic amp for beginners, but more advanced players still need to practice and this is a suitable tool for that. At this price, it would be a good addition for anyone as a good quality portable amp. The ISF EQ and tape delay place it above most of its competitors and it's built like all Blackstar amps – to last!