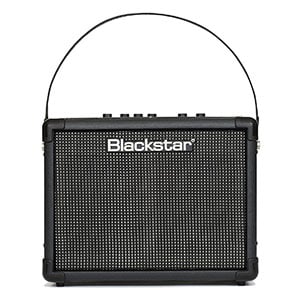 Blackstar has been really pushing the envelope when it comes to practice setups and affordable amps. This goes for both their tube models as well as their solid state designs. The one we are going to take a look at today perfectly describes just how far Blackstar is willing to go in order to give you a supreme tool set to work with at home or in a studio. Blackstar ID: Core 10 V2 is by far one of the most versatile budget amps you can get your hands on, but also among the best sounding ones.

To say that the control cluster of the Blackstar ID: Core 10 V2 can be overwhelming is an understatement. This amp brings the full power of solid state technology to your fingertips. You have six different channels to work with, including various types of overdrive and fuzz. On top of that, you have reverb, delay and a full range of modulation effects to chose from. All of that is then shaped by a gain knob, volume knob, and Blackstar’s trademark ISF single-band EQ. The idea here is that you can layer the tone with various presets, allowing you to dial in a rather complex sound for your guitar. Getting familiar and comfortable with all these controls takes time, but it is well worth the effort. 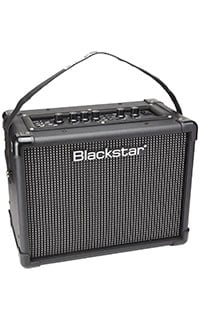 As you could probably figure out from the controls available, this is a pretty versatile modeling amp. It delivers 10 Watts of power divided into two sections 5 Watts each. Even though it is absolutely impressive what you can do with the controls on the amp itself, Blackstar also delivers this model with a hefty software suite. In other words, you can record music, upload and download various patches to the amp, and pretty much play with the tone in any way you want to. The connection between the amp and your computer is established using an USB 2.0 port. Sure, there are numerous models on the market that offer similar capabilities, but you will rarely find a package such as this one in this price range.

When you go and get a budget practice amp, you usually don’t expect it to sound extraordinary. After all, it’s a practice amp, right? Well, Blackstar broke that prejudice in more than one way. Thanks to their stereo technology, ID: Core 10 V2 offers enough output as well as quality to deliver a tone that hits far out of its price range. In
all seriousness, this thing sounds good. Going through various voices and effects, you will find that some are better than the other. However, once you add the software side of the package, you get one highly flexible platform for practice and recording.

Modeling amps are still being developed, and haven’t yet reached their fullest potential. With that said, Blackstar ID: Core 10 V2 perfectly represents just how far this technology has evolved. While you wouldn’t want to use this amp for serious gigging, it is the Swiss army knife of guitar practice sessions and home recording studios. The value you get for the money doesn’t really get better than this. It is one of the cheapest amps of this type on the market.