Founded by former Marshall employees, the British company Blackstar have built their brand on strong overdriven tones and incredible versatility. Their HT Stage 60 Mark II – a new entry in their renowned HT Venue series – takes that reputation to the max.

With 60 watts of power, shimmering cleans, and throaty overdrives, this is certainly one of the best amps under $1,000 on the market today. Let’s break it down and find out why. 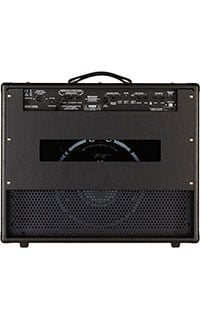 First up, the design. While it’s not the flashiest amp in this price range, the HT Stage 60 oozes style and taste. It comes in an all-wood cabinet for optimum sound and displays sleek, upscale vintage styling with a refined gray grill cloth.

Under the hood, the HT Stage 60 packs a pair each of ECC83 and EL34 tubes and a custom Celestion 12” speaker. Those combine to produce a whopping 60 watts of power – though the dynamic attenuator switch can reduce that to 6 watts for bedroom-level noise without losing the delicious tones.

Beyond all the different tonal choices built in, this amp also allows you to plug directly into a computer for recording via the USB output. A rare feature among tube amps, this allows players to record studio-quality sound without spending hundreds or thousands of dollars on studio recording equipment. 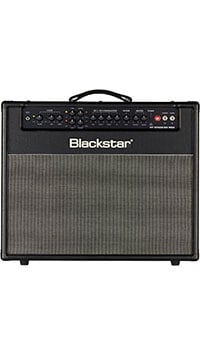 The controls on the HT Stage 60 are probably the most detailed on any tube amp around. While they may take some getting used to, the good news is that they lend the amp an unprecedented level of versatility.

Things start off relatively simple. The clean channel features a volume dial, along with bass and treble EQ knobs. A voice button toggles the sound from a warmer, American-style voicing to a spankier British sound.

Next to these sit the two overdrive channels, each with their own gain and volume knobs, and voice buttons to beef up the sound. To their right lies the three-band EQ panel for the overdrive channels (the two share one set of dials), along with Blackstar’s patented Infinite Shape Feature (ISF) knob. Turning the ISF dial allows players to blend American and British sounds for a more unique and balanced tone.

A universal reverb knob follows, with master resonance, presence, and volume knobs rounding out the mix. For added flexibility, the amp also features a dark/light reverb switch on the back along with USB, DI, headphone, speaker, effects loop, and footswitch outputs.

Name a tone, and you can find it on the HT Stage 60. The three channels and incredible voice adjustments allow for nearly unlimited versatility.

The clean channels succeed in mimicking their inspirations – the warmer voice has all the body and character of Fender Blackface models, while the brighter voice successfully pulls off more vibrant, chimey Vox sounds.

Things really get interesting in the overdrive channels. Without the voice button activated, OD1 is great for classic rock players. The gain sounds organic and amp-driven, with a warm, throaty fullness.

Pressing that button hardens the edge and adds a boost for more modern styles. The second overdrive channel leans more towards hard rock and metal, with an especially ripping, distorted tone with the voice button activated. Blackstar has pulled off some magic here – this amp offers sounds to fit almost any style while maintaining great tube tone.

Players in the market for an expensive amp want a combo that can provide both high-level tones and above-average versatility. The Blackstar HT Stage 60 Mark II delivers on all fronts. It offers a dizzying array of different tone-shaping features and some of the best sounds in the business. Any guitarist searching for a new stage, practice, and recording amp in one should give this some serious consideration.