Vocal harmonizers are one of those effects pedals that add more than just a bit of flavor to your tone. They have the power to completely change the perception of your song. Due to ease of use, harmonizers have become the favorite tool of acoustic guitar players around the world.

Today we are going to check out some of the best models out there, which are easily among the best guitar effects pedals in general. If you are looking for a true force multiplier for your rig, stay with us as we explore the world of vocal harmonizer guitar pedals.

TC Helicon's array of harmonizer pedals includes one of the most advanced designs on the market. We are of course talking about TC Helicon Play Acoustic. From a harmonizer point of view, we are looking at fast, accurate and organic sounding effect.

However, that's only the tip of the iceberg. Play Acoustic brings numerous other tools, including their Adaptive Tone technology that EQs your vocals automatically. As gimmicky as that sounds, it actually works. TC Helicon even packed some of their most legendary reverbs, delays and chorus effects in this package.

These are all effect which are usually not so great in this type of pedal. Overall, Play Acoustic hits all the right buttons and it does that with style. 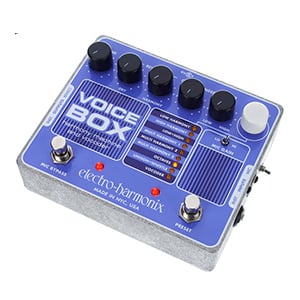 With all the usual suspects releasing harmonizers left and right, it was only a matter of time before Electro-Harmonix refreshed their offer. The pedal that marked this event is the Electro-Harmonix Voice Box Harmony Machine.

By most standards, it lacks some crucial features, however, there's more to it than that. Electro-Harmonix went ahead and created a bullet proof harmonizer that will work flawlessly with any type of gear you can plug into it. Tracking is great and stays on top of even those complex chord progressions.

What is really awesome is the color of the effect, or better yet, the range of color. You can go from fully artificial to subtle organic sound in a second. It is simply awesome 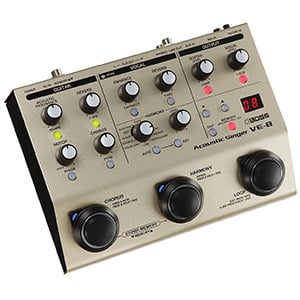 Boss is known for their numerous effects pedals and processors. With that in mind, it doesn't really come as a surprise when they release a real acoustic guitarist's multi-tool.

Boss VE-8 offers an extremely capable harmonizer effect, as well as a chorus, looper and more. The pedal is aimed at acoustic players who want to spice up their tone a little, and that's something it does extremely well.

While the pedal might be a bit cumbersome, it's important to note just how clean the layout of controls really is. You won't have to spend days trying to figure what each knob does since Boss used no-nonsense labels for everything. Lastly, the I/O cluster is impressive, to say the least.

TC Helicon offers what are probably the best harmonizer pedals on the market. Their Harmony Singer drives that claim home quite clearly. This harmonizer stompbox features a very sturdy design with great build quality and smart layout.

Controls are intuitive, easy to use and include things you don't generally see that often. What matters the most is its accurate tracking. The pedal sounds very natural compared to some other models out there and allows the user to adapt the harmonizer effect to closely fit the needs of the track.

On top of that, the price is right. Those who need a simple yet reliable harmonizer in their setup should definitely check this one out.

VoiceTone Harmony-G XT belongs to the more complex segment of TC Helicon's offer. The pedal was designed around the harmonizer effect, but also brings a few other features that are useful.

The very core of this unit is TC Helicon's advanced processor unit. Since the pedal is guitar operated, it is encouraging to know that you have a state of the art chip doing all the work for you. With a rugged construction, easy to use interface and lots of range, this harmonizer is a no-brainer.

The only thing to keep in mind is that there's some setting up necessary before you can fully explore the capabilities of VoiceTone Harmony-G XT. However, that takes an hour or so at most. 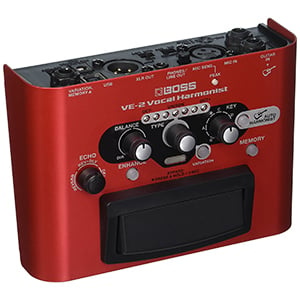 Boss has a thing for designing simple pedals that work. VE-2 harmonizer is definitely one such pedal. It's fairly compact, packs a punch and brings you the core harmonizer performance with no clutter.

Everything about Boss VE-2 is solid, starting with its chassis. One interesting thing about this pedal is its hybrid mode, which combines the manually selected key with automatic tracking.

Only gripe we have with VE-2 is the cluttered user interface. This is very unusual for Boss to say the least. Even so, it only takes a few hours to figure what each button does. In the grand scheme of things, that effort is well worth the reward that follows after. 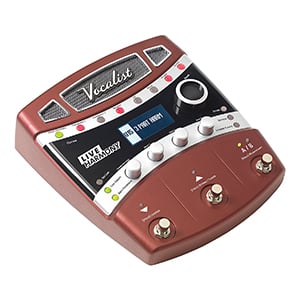 DigiTech VLHM represents what is arguably the best combination of components and features for budget users. The pedal is extremely capable, with a clinically accurate tracking and a solid processor to support all that.

Built in features are numerous, including various effects as well as modes of operation. This is a standard guitar operated harmonizer, but one that also offers automatic tone adjustment. Stuff like that is usually reserved to much more expensive models out there.

DigiTech has essentially created a perfect nemesis for a number of competing models, even though it is considerably cheaper. That makes it quite alright in our book. If you are after a decent budget solution, check this pedal out. It's definitely worth it.

What Does A Vocal Harmonizer Do?

These pedals in their modern sense are audio processors. You feed both your guitar and your microphone into the pedal and it essentially creates a harmonies that follow the tonality of what you are playing on a guitar. In much simpler terms, a harmonizer gives you a chorus type effect for your vocals. On its own, having a vocal harmonizer in your kit is a mighty tool. With one of these pedals, you can hit the stage with just a guitar, a microphone and an amplifier.

Whenever you want to give a specific section of the song some girth, just press that switch and you have it. Older pedals were much simpler. Instead of tracking what you are playing on a guitar, you would simply manually select a key of choice. Some of the modern models also have this feature, which is a nice safety if the pedal starts having issues with tracking.

Considering that every model features both XLR and TRS ports, you can use this pedal with a variety of other instrument. Basically, anything that is powered and amplified is a go.

These pedals much like most of today's guitar effects, have evolved considerably over time. As technology advanced, we have gained access to more powerful processing units that could handle numerous tasks at once. This is partially why just about any vocal harmonizer you can pick up on the market, has perfect tracking abilities. There is simply enough CPU power behind the effect to drive it to that level.

Aside from accurate tracking, modern models are packed with a whole array of additional options. These include effects like reverbs, which often come in form of legendary reverb pedals made by that manufacturer in the past. They simply take the signature of that pedal and port it into the harmonizer. Same goes for delay pedals.

Still, those are all features you more or less expect to see. Where modern models really come to shine is automation. If we take the TC Helicon Play Acoustic from our list as an example, we will see that this pedal features what is called an Adaptive Tone technology. This feature automatically EQs, de-esses and generally tunes your vocals as you perform. TC Helicon is not the only brand that features tech like this, but theirs is by far one of the best.

How To Choose The Right Vocal Harmonizer

Much like with other things in life, there is always that catch hidden somewhere. With vocal harmonizers, it's their price. If you want a top tier unit, excluding more inclusive processors, you can expect to pay a decent amount of money. The very first step in choosing the right one is to define your budget, but more importantly, define your intended use for this pedal.

If you can live without all of the extra features, chances are you will find some pretty attainable models. On the other hand, if you insist on having the latest and greatest, that will put a dent in your finances. Another thing to keep in mind is the type of harmonies offered. Every brand tries to present their own take on this effect, but they generally always include neutral harmony modes. The point here is to find a model whose ‘unique' harmonies are right up your alley. As you could expect, this requires quite a bit of research. If you do everything right, all of that effort will pay out several times over.

It is no secret that modern units are powerful, however they still have some limitations. One limitation you are probably going to run into is the lack of range. That means that the pedal is going to run out of available pitch, at which time you won't get the effect anymore. Those pedals that have manually adjustable key often offer a hybrid mode of operation. When used, this mode will track your chords until it runs out of range and then just default back to whatever value you've manually selected.

The other limitation is outpacing the processor unit in the pedal. Even though this rarely happens anymore, there are some instances where you can just be faster than the active tracking capability of your harmonizer. This is an issue that is present in various pedals that depend on active tracking. Some are more susceptible than others, but the technology is slowly closing that gap for good.

Vocal harmonizers are one of those niche pedals that only work in specific situations, but have the power to completely change your tone. If you're running a minimalist setup for unplugged sessions, one of these units can add some serious girth to your music. Best thing about them is that most of the ones you can find right now are awesome in almost every regard. Sure, some are better than others, but you'll usually get a very solid core performance. Lastly, vocal harmonizers are the type of pedals that urge you to explore your skills, both vocal and guitar related.