When most guitar players hear Behringer's name in the same sentence with the word ‘pedal', the first thing that comes to mind is entry level gear. Well, this definitely holds some truth, but you would be surprised just how many times Behringer actually cooked up something impressive in their 20-bucks-per-unit kitchen. For example, check out this Behringer Ultra Vibrato UV300.

This thing, just like many of its more expensive counterparts, comes packed with great features. Most importantly, the pedal has the necessary core performance that elevates it to a whole new level. Today we are going to get to know this bad boy, and show you just what it can do. As you are about to see, it can hold its own against some of the more competitive vibrato designs out there. 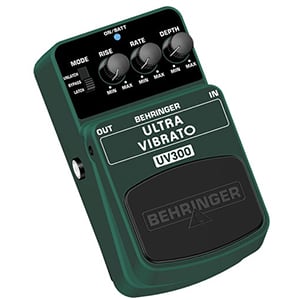 Alright, Behringer pedal bodies are nothing to write home about, that much is apparent. You don't want to abuse them too much, because they are the first thing that goes on these pedals. With that said, this particular one packs all the right features in all the right places. We are talking full vibrato control, from the very sensible control knobs to mode select switch that allows supports several modes of operation.

The same ones you will find on any respectable mid to high tier model. All that, for a mere fraction of the cost. What more could we ask for? Believe it or not, this Behringer has a reserved spot in the guitar pedal hall of fame. What you see is pretty much what you get with this unit. There are three knobs on the top of the pedal, next to a single switch. The knobs allow you to adjust the Rise, Rate and Depth of the effect, while the Mode switch toggles between Latch, Bypass and Unlatch. While these controls are pretty standard, it's nice to see a latch feature on a super affordable model such as this one. The bypass isn't a true one, however it works rather well enough all things considered. From a distance, the available controls appear to be rudimentary, but they are enough to get the job done and then some.

If we were to tell you that you are going to get a boutique type performance for a price of a pizza with extra toppings, we would be lying straight to your face. No, Behringer Ultra Vibrato UV300 is no unicorn capable of majestic vibratos, it's a pedal that meets the expectations and somewhat exceeds them.

The performance is balanced, based around the core vibrato effect, and pretty conservative by all standards. Is that a good, or a bad thing? Well, that depends on what you need. However, if you are just looking for a decent basic vibrato, you can't do better than this.

At the end of the day, Behringer Ultra Vibrato UV300 is the working man's stompbox that comes with a no-nonsense performance package capable of getting the job done. If you want more than that, you will need to open up for a more expensive unit. What we wanted to know is whether or not it's a decent vibrato unit despite its price and appearance. We got our answer, and we are very pleased with it. If you are on a budget, so will you.