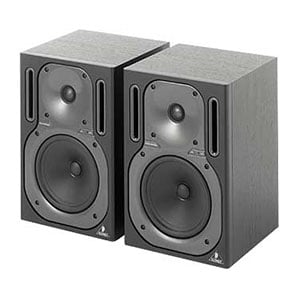 Behringer might have been under quite a bit of scrutiny lately, however, their studio monitors appear to be more or less untouched. Behringer Truth B2030A – for example – is one of the most interesting monitors you can pick up under $200. Let's check out what it has to offer. Even though it doesn't really matter that much, the Behringer Truth B2030A set features a design that considerably stands of from what is more or less the norm for this segment of the market. To begin with, they have used decent quality MDF for cabinets, covered in dark gray vinyl. Now for the cool part. If you look at the front panel of the Behringer Truth B2030A, you will see that there are two front firing ports present. These are slotted in design and positioned on both sides of the baffle.

Speaking of which, both the low-frequency driver and tweeter share the same baffle, although the portion around the tweeter features a subtle waveguide. Controls are located in the back of the unit, where you will also find a detailed explanation of what each switch does. This is actually fairly helpful for those who aren't sure how LF and HF trim work. Looking at the hardware, there are quite a few things that stand out right from the start. Transducers they have chosen for this model come in form of a 1″ ferrofluid-cooled tweeter and a 6.75″ long throw low-frequency driver. These are each powered by their own amplifiers, capable of delivering 80 Watts and 35 Watts respectively. On top of that, Behringer has installed a fairly complex crossover network that features 4th order Linkwitz-Riley filters. While these are nothing special, they add to the consistency of performance.

Next, we have the magnetic shielding that allows you to place Behringer Truth B2030A close to any electronics without worrying about interference. Room acoustic controls are fairly sensitive and include both LF and HF as expected. There is also Room Compensation that adjusts the performance of the low end depending on whether the speaker is next to a wall or a corner.

Despite looking very cool, what really matters is how good Behringer Truth B2030A perform. Fortunately, what we have experienced after some time messing around with these monitors, is overly positive. Before we go any further, the response is surprisingly flat. However, we did have to work a bit in order to get that transparency. Expect to use all of the acoustic controls available. Out of the box, Behringer Truth B2030A is all over the place.

Highs will sound harsh and unfriendly in general. After playing with the controls for a few minutes, you should find a setting brings these speakers where they need to be. The power is abundant, to say the least. Even though these are still near field monitors, you can expect quite a bit of volume. Overall, we were pleasantly surprised by what Behringer was able to deliver with Truth B2030A.

To say that Behringer is the underdog in this specific segment of speaker market would be an understatement. Even so, their Truth B2030A have proven to offer the type of value for the money you generally don't see too often. These are easy to work with, versatile and decently powerful.