For a guitar hero on a budget, we bring you the Hellbabe wah pedal from Behringer. In our view, this is one of the devices of today's guitar market that epitomizes the concept of budget cuts made at all the right places. It was sort of build cheaply, yet it doesn't feel cheap at all.

Is this the best wah out there? No, of course not. But is it the best wah within this price range? Yes, absolutely. You can get it for around $50, and it's worth around twice more in our humble opinion. Let's check out the details now!

When we mentioned those budget cuts done right, we mainly meant the design. This is a plastic pedal, yet it’s very strong and sturdy. This was accomplished by adding a metal foundation and a rubber grip, none of which feel cheap and even give the device a classy vibe. All-metal construction wouldn't hurt, of course, but for this price it's pretty awesome as it is.

When it comes to functionality, it should be noted right from the get-go that the HB01 utilizes the so-called “step on, step off” type of control, meaning that there's now on/off button as the pedal switches on as soon as you even slightly step on it.

On the inside, the pedal is packed with low-noise circuitry that runs via 9V battery or through a standard power adapter. Two LED status indicators are also included in the mix, one for Effect Status, and the other for Boost Status. 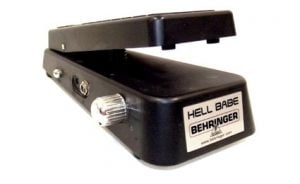 The pedal comes with four control knobs – three small ones on the left and the big one on the right.

The big one is Range, which allows you to adjust the pedal's frequency range anywhere between 440 an 250 Hz. This is a rather wide range, especially for this budget, allowing you to use this Behringer one bass guitars as well.

It should be noted that the pedal comes with optical control, which happens to be a feature of high-end items. This means you won't ever have to worry about those scratchy pots, which is good, great even!

The remaining Q controls allows you to adjust the boost and shape up the wah's tone until it matches your needs to a tee.

Very, very nice! First of all, the pedal feels exceptionally smooth. The “step on, step off” control works like a charm and we find it so much easier to rock out with no on/off buttons. The controls work pretty good on both guitar and bass, and the sound is smooth, wobbly and swirly.

The boost feature will also give you a nice extra 10 dB drive, but the area in which the pedal lags behind high-end models is precision. This one is nowhere near as surgically accurate as classic Cry Baby, but seeing that it's three times less expensive, we say you're still getting a killer deal!

Overall, another Behringer that pleasantly surprised us! The German manufacturers seem to have become the masters of the budget-friendly realm, and we say this fella is 100% usable for players of any genre and skill level. Good stuff!