BC Rich Warlock – Embodiment of a Budget Heavy Tone 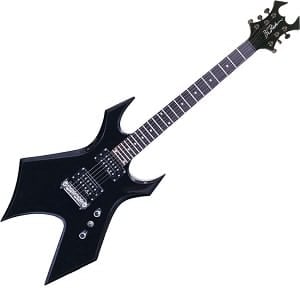 BC Rich is known to most as the company which makes some pretty weird looking guitars. BC Rich Warlock is by far their most popular model, and at the same time one of the go-to budget guitars for beginners. Warlock body shape has been pretty controversial ever since it first came out. BC Rich wanted to create a whole new guitar that was different from what was available at the time, and so they did. It’s worth mentioning that jagged contours were popular back the, it’s just that BC Rich took it to a whole new level.

Tonewood of choice for BC Rich Warlock is Agathis, and the finish comes in several different solid colors. On the other hand, the neck is a standard maple design with a rosewood fretboard. After all, this is the trademark feature of budget guitars.

Electronics found on BC Rich Warlock come in form of two in-house made humbuckers. These are your regular passive pups that get the rugged tone very well. It’s no secret that Warlock was designed for metal and other heavier genres of music.

There’s enough range present to put this guitar into use for blues or rock as well. Anything more refined than that can be tricky. When it comes to controls available, you are looking at a single Tone knob and a single Volume knob. Between these two, there’s a pickup selector switch, giving the whole guitar a bit more versatility. 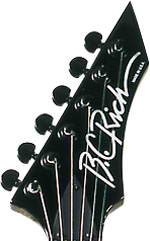 In terms of hardware, we are looking at a very standard Tune-o-Matic bridge paired with a set of die-cast tuners on the headstock. Speaking of which, this Warlock sports a standard bladed headstock, and not the more popular goth design which goes along the original body shape form.

The quality of the hardware is decent, but nothing extraordinary. A proper setup of the action might come necessary, and tuning might require adjustment from time to time. Again, that is more or less standard for budget guitars.

Metal is by far the type of music where this guitar feels at home. It all comes down to the fact that the pickups delivered with the guitar are more of a sledgehammer than a scalpel, so they tend to handle saturated distortion rather well. From a beginner’s standpoint, BC Rich Warlock has a massive tone.Pair it with a decent dirty amp channel or a good distortion guitar, and you will get the type of performance its strange aesthetic suggests.

On a clean channel, the guitar delivers a performace that is quite satisfactory. It’s no better nor worse than your average entry-level model, but it does pack a bit of additional sustain.

BC Rich Warlock is the type of guitar bought by those who want something different, dare I say unique. Fortunately, this guitar has good enough performance to back up its looks. At this price, it’s one of the better choices available at the moment.

For more info about the BC Rich Warlock, click here.
For more electric guitars under $200, click here.