Jack of all trades but master of none are words that describe so many multi functional pedals out there. Brands are constantly on the prowl to see if they can squeeze more in less, and give the end user a silver bullet for whatever need they might have. Let's just say that this approach is known to backfire quite spectacularly. In case of BBE Mind Bender Dual-Mode Analog Vibrato/Chorus, that is not the case.

This pedal actually managed to fuse two somewhat different effects and deliver them both in a way that is not only acceptable, but pretty impressive to say the least. Truth be told, it has earned itself a spot on our list of best guitar effects pedals due to its performance. One of the first things that will catch your eye when you start inspecting the BBE Mind Bender Dual-Mode Analog Vibrato/Chorus, is its fully analog circuitry. If it was some other price range we were talking about, this fact wouldn't be all that intriguing. However, BBE surprises us once more. The enclosure is a wide body design that looks pretty vintage.

The layout of controls and everything else on the pedal is simple as it can be, but rather aesthetically pleasing. That is, if you like minimalist designs. Compared to other noteworthy vibratos available, Mind Bender is up there with the greats. 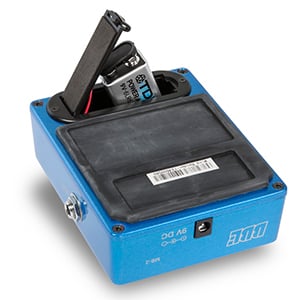 Overall, no matter how insufficient these two lone knobs might appear, they are more than enough to dial in a very warm sounding vibrato. The performance of this awesome blue box is great to say the least. In all honesty, we expected far less than what it had to offer. Fortunately for us, we were wrong.

Why a BBE Mind Bender Dual-Mode Analog Vibrato/Chorus? Well, the reason is rather simple. It's a vibrato pedal that has a far reach, and a lot of room for exploring the tone in between. Once you start playing with different speed and depth values, you will quickly figure out that this vibrato unit offers a lot of headroom to work with. It is fair to say that it has more range than most other pedals we have seen in this segment of the market.

At the end of the day, what was an unexpected hit from the left field, turned out to be one of the most capable vibrato boxes you can get today. It's solid, both in terms of its physical reliability and overall performance, and it packs a serious punch at a price that is more than tempting. The thing comes with a price tag that most guitar players would be comfortable with, even if they are not necessarily looking for a pedal of this type. Is this the best bang for the buck model out there? Yes, that would a correct assumption to make at this point.

For more info about the BBE Mind Bender, click here.
For more Vibrato Pedal Currently On The Market, click here.