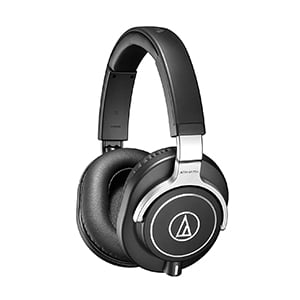 Audio-Technica’s ATH series are regarded as the best cost-effective choice out there. The most advanced model in the series, Audio-Technica ATH M70x, also happen to be among the most capable studio headphones you can get under $300. Let’s take a closer look and find out what these have to offer. Audio-Technica ATH M70x is probably the most different model in the series, without including performance. Every ATH M model before it shares mostly the same design, but not the M70x. For starters, they have used a decent amount of aluminum to provide rigidity and durability. You will mostly find in the forks which support the driver housings, as well as the swivels. Headband is interesting on this model. Instead of padding the entire thing like they did on other ATH M series models, padding on M70x is focused to a limited surface on the inside of the headband. There are things it shares with its cousins. To be more specific, both ear cups can rotate 90 degrees side to side. In terms of aesthetics, however, these are on a whole new level of refinement. Where other M series headphones look alright at best, M70x has that exclusive vibe to them. What Audio-Technica ATH M70x offers in terms of features is interesting as well. Drivers of choice are two 45mm units with lots of potential. Contrary to popular belief, these are not the same 45mm drivers found in ATH-M50x. For example, the frequency response range goes from 5Hz to 40kHz, which is pretty wide. Sensitivity is set at 97dB while the impedance is at 35 Ohms. This translates to two things. First being that you can use ATH M70x with mobile devices with a decent amount of success, while the other is that you will get plenty of volume. The cable is detachable, which is also one of the more important new features compared to the rest of the series. You get 10 foot coiled cable, a 10 foot straight one and a 4 foot straight cable. Overall, M70x may not be as flashy as some models, but it’s definitely competitive.

In terms of performance, you are looking at a very interesting combination of clinical transparency and great balance. If you were to graph the response, you would see a decently flat line all the way from 10Hz up to 10kHz. Only after you reach that mark is there a noticeable dip. For the most part, that is perfectly acceptable performance from a set of semi professional monitoring headphones. Volume is great even without any amplification while the same can be said about detail and clarity.

When it comes to comfort, M70x are very counter intuitive. You would think that limited padding on the headband would be anything but comfortable, however it actually works well. Ear pads are the vinyl kind, although a pretty good quality vinyl was used. Even so, it is arguable that velour would have probably been a much more appropriate choice of materials.

Audio Technica ATH M70x continues the tradition of delivering optimal value for the money, even though it is not exactly affordable. The performance, comfort and build quality matches is about as good as it gets for this type of money. Overall, ATH M70x is an awesome choice for any producer.