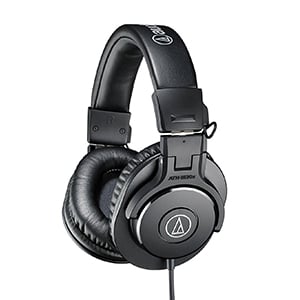 Audio Technica's ATH M series have rocked the industry when they first hit. Out of the entire series, ATH M30x probably packs the best value for the money. On top of that, it is one of the most efficient studio headphones you can get on the lower side of $100. 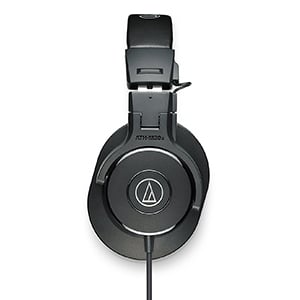 Design wise, Audio Technica pretty much took a single platform and developed the entire series on top of that. If circumstances were different, that might have been a disaster. However, in case of Audio Technica it was the perfect move. The frame itself is very simple and depends on sliding extension for adjusting for user preferences. What makes it stand out is the amount of padding Audio Technica has applied. Aside from fairly comfortable ear pads, the entire headband is just layered with padding. Both ear cups are capable of 90 degrees of rotation along the horizontal axis, and some 15 degrees along the vertical axis. With so much versatility, it is comforting to know that build quality is impressive for the price. On top of that, Audio Technica added little details here and there which add to the aesthetics as well. 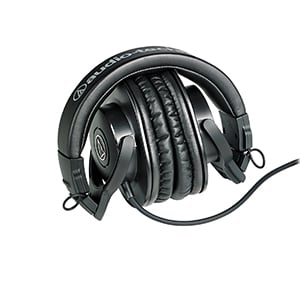 The core of the Audio Technica ATH M30x is comprised of two 40mm drivers. Contrary to popular belief, the number in the designation of the model doesn't indicate the driver size. With that said, you are looking at 15Hz – 22kHz frequency range at 96dB of SPL and nominal impedance set at 47 Ohms. These specs are absolutely great considering that M30x is on the lower end of its price range. One thing that is sticking out like a sore thumb is the cable. Whether or not Audio Technica could have went with a detachable cable is up for debate. There are instances of much cheaper headphones with this feature, but it also seems to be the standard among the competition. To be fair, they did include 10 feet of decently rugged cable which isn't easy to damage. Still, a detachable cable would have made these headphones a 100% package.

What defines ATH M series is their performance. The mail sales pitch was bang for the buck like you won't find elsewhere. Bach when they first launched these headphones, this was absolutely true. Interestingly enough, the situation didn't change to this day. Is ATH M30x the absolute best thing you can get for studio use? Probably not, but the type of transparency, clarity and definition you get for the money makes them the ultimate choice. Those who are on a tight budget are already limited in terms of their choices, which is exactly the type of gap Audio Technica was looking to exploit. In terms of comfort, these do a lot better than even some of the more expensive models. For starters, the ear pads are deep enough where 99% of the users won't feel discomfort. There are $100 headphones which can't claim the same.

In the end, Audio Technica ATH M30x are exactly what the budget crowd needs. In other words, a reliable, competitive and comfortable set of headphones that simply work. Sure, it has its downsides, but those are rendered harmless when you include the price of the set into the overall context.