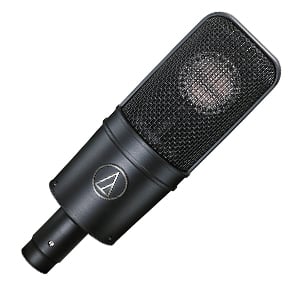 Audio-Technica’s line of condenser mics perfectly represents their reputation of delivering no-nonsense studio equipment. While they are a big name in the budget price ranges, they are just as prominent in the midrange condenser market, as the AT4040 proves. This popular large-diaphragm mic is one that’s well worth taking a closer look at. 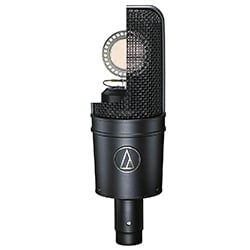 On the face of it, the AT4040 is an aesthetically simple mic, with a side-address configuration and rugged all-metal build that looks pretty sophisticated. Considering Audio-Technica’s apparent love of the color black, there’s no surprise to see the AT4040 featuring a stealthy all-black design and, aside from the large Audio-Technica logo, there’s not much that disturbs the overall simplicity.

Interestingly, instead of opting for a standard tightly-knit metal mesh, Audio-Technica used a much wider mesh that reveals the large diaphragm inside. This detail alone gives this mic a higher-end look that you’d only find in this sub-$300 range and up. Despite the slightly fragile nature of a semi-exposed diaphragm, the AT4040 is built like a tank and could easily withstand the daily terrors of studio use. 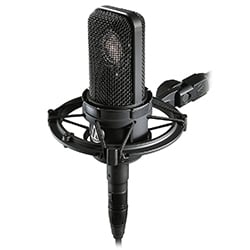 As we mention, the wider mesh reveals some of the hardware underneath, which comes in the form of a high-quality and rather delicate large diaphragm (at 0.8” in diameter) that’s tuned to borderline perfection. Note that this side-address mic features a fixed cardioid pattern.

The frequency response ranges from 20Hz to 20kHz, while the max SPL comes in at 145dB, pushed up to 155dB when the -10dB pad switch is activated. That’s a lot of room to work with whether you are focused on vocals or instruments.

In addition to the attenuation pad, this mic is also equipped with a low-pass filter. All of this makes for a very promising setup right out of the box. On that note, it comes shipped with a carry case, a shock mount and a dust cover, adding to the all-round feeling of value.

When put to use, the AT4040 reveals just how versatile it is. Vocals are clear and bright, well defined and present just enough warmth in the right places, which is great considering that frequency response graphs feature some pretty serious spikes once you start going north of 5kHz.

What came as a nice surprise was the AT4040’s performance when recording instruments. Guitars sound natural and convincing, while results are similar when recording amps as well. Due to its high SPL handling, the AT4040 can also be successfully employed as a solid drum microphone as well. No matter what you record, you will hit the same levels of reliability and consistency.

When it comes to no-nonsense performance, Audio-Technica really is hard to beat and their AT4040 follows this ideology very closely. Producing clear, warm and natural recordings of both vocals as well as instruments, it has proven to be one of the most practical microphones to have in any studio. For under $300, it’s a strong recommendation for serious musicians everywhere.