Some of the very best MIDI keyboard controllers are functional but… well, a bit bland. Some are stylish but don’t really do the job. Today’s featured controller – the Alesis V49 – is both functional and has visual appeal. Sounds good so far! Let’s take a closer look at what Alesis has in store for us… 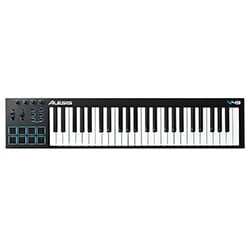 Off the bat, the Alesis V49 features great design. It’s not groundbreaking in any way, but it feels as if it has been designed with love. It’s pretty minimalist, with a simple sleek matte black chassis and a wide array of cool-blue backlit buttons, pads and knobs, that make it look awesome in a dark room. For such a budget controller, this combination makes it feel very professional – a grownup controller. The construction of the V49 matches the cosmetics and feels sturdy and built to last. Overall, very solid. 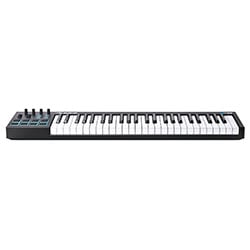 When it comes to features, it is clear that Alesis has had to made some sacrifices. They obviously wanted to use full-sized piano style keys, but they also had to find space for the rest of the features. The result is a lack of what many would consider to be a standard package of controls. Aside from the 49 keys, there are eight programmable trigger pads, six buttons, four programmable knobs and two rubber-coated jog wheels. That is pretty much it, apart from the option of adding a sustain pedal.

For the low price, it certainly isn’t a bad deal – and has more than enough for beginners to get involved with – but experienced users may be left wanting more. Still, this budget beauty more than makes up for it with performance and reliability. Note that the Alesis V49 is compatible with both Mac and Windows machines, while the included set of software features several great titles, including Ableton Live Lite 9.

Great looks aside, the real question is over how this thing performs. Overall, pretty well indeed! Getting used to the layout of controls takes some time, but nowhere near long enough for you to feel frustrated. When you are used to them, it’s a straightforward piece of kit to get to grips with.

The keys are very responsive – up there with some of the higher-end controllers – and will suit a piano player due to the full-size nature. The knobs and wheels are firm, but feel accurate and nice to use. It also performs well across the board with excellent compatibility across all platforms and DAWs.

The Alesis V49 is definitely a thing of beauty and packs a visual punch. With the full-size keys and lack of some features, it is a niche controller that servers a focused purpose. However, for the affordable price, it is functional and versatile, and an awesome choice for anyone looking for their first MIDI keyboard controller.