Alesis M1 is currently one of the best studio monitor speakers you can find under $100. This compact pair brings a number of interesting solutions that you don’t often see in this class. Some would say that Alesis forced numerous compromises with this set, but that is not necessarily true. The overall design of the Alesis M1 is pretty minimalist in nature. There are no intimidating black cabs with complex baffles and space magic waveguides. Instead, you get a much simpler package. Alesis went with a basic MDF build where the speakers are permanently covered with grilles. Some will appreciate this approach, others won’t. However, the thing to keep in mind is those aesthetics were never what Alesis M1 is all about.

Controls are divided between the front side of the active unit and its back panel. At the front, you will find the volume knob which is also the power switch. The back is where the ominous bass boost switch is at. In terms of I/O, Alesis went with a set of RCA, 1/4″ TRS and 3.5mm inputs while the AUX port is at the front. We also have the USB port, which is important. 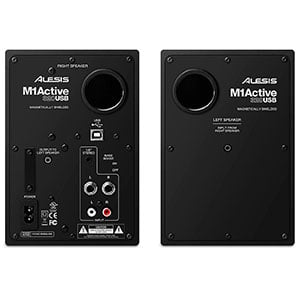 M1’s hardware consists of a 1″ silk dome tweeter paired with a 3″ low-frequency driver. That is about as standard as it goes in this category of monitors. One of the few upsides of having such small drivers is the fact that M1 will work great in tight spaces. In terms of power, each cabinet is capable of producing some 10 Watts RMS. That’s 20 Watts in a set that is relatively small and easy to use.

The bass boost feature is basically a monitor speaker/desktop speaker toggle switch. It adds that extra bias towards the lower end, which is awesome when you just want to feel that thumping bass. USB port allows you to connect the speakers straight to your computer and offers digital conversion at a 16-bit rate. Since M1s were designed to work around computers, Alesis has included full magnetic shielding which is a nice touch.

Judging the performance of Alesis M1 puts them right in the top 30% of monitors in their category. They are not completely flat, but the response you get is absolutely good enough for enthusiast level music production and mixing. Just like most of their competition, M1 monitors claim an 80Hz-to-20kHz range. In practice, things are a bit different. No matter what you do, the output simply starts sinking right around that 100Hz mark.

Again, that is a byproduct of using 3″ bass cones and there is hardly anything you or anyone else can do about it. Setting up the speakers is fairly easy as long as you mind the rear firing ports. These speakers are relatively light and definitely more compact than most out there. This makes them a good choice for both small home studios, but also those who need some transparent sound on the road.

When all is said and done, Alesis M1 is a well thought out package. They bring benefits that cater to a niche type of user, but their overall performance doesn’t lack anything either. For this type of money and this type of sound, Alesis M1 is definitely a package worth looking into.