Small hands have been one of the things many guitar players have considered to be a limiting factor for those who want to play guitar. That is simply not true. If you want to know why, check out our piece that deals with this subject in detail Are Small Hands A Deal Breaker For Playing Guitar.

With that said, we are going to try and drive the point home even harder by giving you why tangible reasons why small hands are not a problem for playing guitar. Hopefully, by the end of this article, you will realize that small hands aren’t really a limiting factor when it comes to being good at playing guitar.

1. There are many famous guitar players who have small hands

That’s right, a there’s a lot of guitar players who have rather small hands, but who have managed to reach world class levels of popularity thanks to their guitar skills. The first one that comes to mind is Angus Young. If you look closely to any video of AC/DC’s live performance, you will see that Angus has pretty small hands.

So small that he in fact wraps his thumb around the neck in order to play power chords. This is a technique that isn’t limited to those who have smaller hands, but it definitely helps. Do you think that Young is limited in any way, or that his skills are not good enough?

2. There are kids out there who can shred a guitar like it’s nothing

Think about this for a moment. There’s a lot of young kids who start playing guitar. Whether we are talking about formal education or self-thought guitar players, you will find a whole lot of really small kids who are simply killing it on guitars. Hand size of a child is much smaller than that of an adult.

If those kids can reach that level of proficiency with their tiny hands, a grown up person can most certainly hit the same levels no matter how large or small their hands are. The trick is in perseverance. Those kids spent hundreds of hours practicing techniques and perfecting various exercises.

3. Our body is capable of adapting If there is one thing that we can say our bodies do well, it’s adapting to new environments. This is a process that has been set in motion at the beginning of our time when first humans began walking upright.

We are capable of overcoming much greater anatomical setbacks than reaching several more frets on a guitar’s neck. Your hands are very flexible, even if you probably don’t know it yet. You would be surprised at how much range you can gain simply by performing various exercises.

4. Modern guitars are optimized for all hand sizes 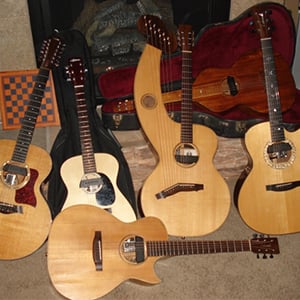 The only instance where small hands can really be an issue are classical guitars. These have a much wider neck that is hard to play even for someone who has fairly large hands. Other than that, you are looking at a very slim and narrow neck profile that leaves a lot of maneuvering room even for smaller hands.

On top of that, there are guitars which are designed specifically for people who have issues playing a regular sized guitar. We compiled a great list of acoustic guitars for players who have small hands, which you should definitely check out if you think regular sized guitars are just too much for you.

5. You can always apply different techniques

At the end of the day, if you really think that there is no way to play a certain shape the way it was meant to be played, you can always bring it within the scope of your abilities by playing the same tones in a different position on the fretboard.

This is something that has been done for decades and is a legitimate solution for shapes that are hard to master. One of the best things about guitars in general is the fact that you can play a single progression on several different places on the fretboard, using alternative shapes. With some creativity, there won’t be anything you won’t be able to play.

Most of the things we mentioned here might come across as fairly obvious, and it is. That is the whole point of this article. Saying that someone can’t be a good guitar player because they don’t have long fingers is so wrong that it warrants articles such as this one.

All of it comes down to the amount of time and effort you put into developing a skill or ability. There are exercises for stretching your hands, there are techniques that can mitigate the need to make huge jumps from fret to fret. There are simply too many solutions and alternatives that having small hands is definitely not an issue anymore.

Even those who have abnormally small hands, and we are talking in terms of medical conditions here, have a variety of options that will solve the problem in a pretty efficient way.

Sure, having large hands and long fingers makes things a lot easier to get a hang of, but it’s not a necessity. You can be just as fast, accurate and expressive with shorter fingers and smaller hands. It’s all about practicing techniques and adapting them in a way that is comfortable for you to play.